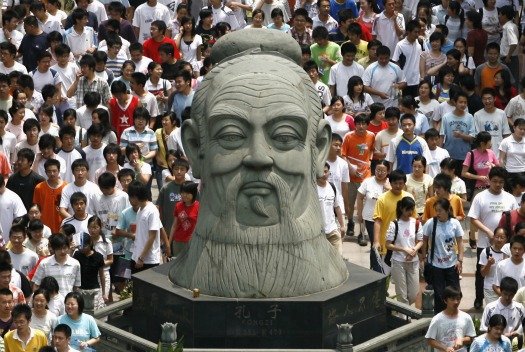 So I didn’t come up with this clever title myself. Rather Harmony & War is the title of a terrific new book by Yuan-Kang Wang, an assistant professor at Western Michigan University. The book is one of a rare breed of books on China that is both substantively rich and eminently readable. As an added bonus for the author, it is very timely.

The essence of the book is an exploration of the role of Confucian precepts of pacifism in Chinese history. A bit esoteric? In theory maybe. However, Wang’s book may well prove to be the reality check needed by both Chinese leaders and the rest of the world.

China is the in the midst of creating an historical narrative to buttress its claims of its peaceful rise. The heart of this narrative is China’s deep Confucian roots, which, in theory, have underpinned China’s tradition as a non-aggressive power, disinterested in war of territorial acquisition. Through a fascinating and detailed accounting of Chinese history during the Song and Ming dynasties, Wang demonstrates the fallacy of such a linear narrative. Certainly there were debates about whether Chinese leaders should go to war. However, as Wang amply evidences throughout his book, “Defense or accommodation was usually the result of insufficient military capabilities. Contrary to the proponents of Confucian pacifism, Imperial China was not reluctant to use force, and it did not see force as a last resort.”

As China’s leaders continue to draw on their Confucian past to try to allay the fears of the rest of the world, there will no doubt be a spate of books to counter or amplify Wang’s argument. (In fact, Tsinghua University professor Yan Xuetong is due out with just such a book later this spring.) Wang’s work should reinforce to Beijing—as well to the rest of the world—that Chinese exceptionalism as a pacifist power will have to result from the country’s actions today, not some fanciful recounting of history.

Computer Crimes Act and the Ramifications for Free Speech in Thailand

Are Russia and India backing Cambodia against Thailand?