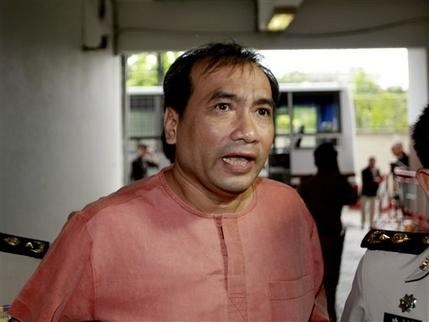 Joe Gordon, a Thai-born American, was arrested and remanded in custody in May this year while he was on holiday in Thailand. He was officially charged on 30 August with lèse-majesté for translating excerpts of the banned biography of King Bhumibol Adulyadej by Paul Handley, “The King Never Smiles”, on his blog.

At first he denied all the charges, but subsequently pleaded guilty on 10 October thereby avoiding a five-year prison term. His lawyer, Anon Nampha, said his client would not appeal but hoped for a royal pardon.

Thailand’s lèse-majesté law is among the most restrictive legislation in the world as far as freedom of express and freedom of information are concerned. However, Prime Minister Yingluck announced at her swearing-in on 10 August that it should not be used inappropriately.

Thailand’s lèse-majesté law is among the most restrictive legislation in the world as far as freedom of express and freedom of information are concerned.

Since the 19 September 2006 coup, there has been an exponential expansion in the use of article 112 and the 2007 Computer Crimes Act to intimidate dissidents and constrict speech more generally. Now Thailand is listed as a “country under surveillance” in the Reporters Without Borders report on “Enemies of the Internet” and is ranked 153rd out of 178 countries in the Reporters Without Borders press freedom index.

While the case of Ms. Chiranuch Premchaiporn is the case most widely followed internationally, in 2011 there have been a number of other significant sets of charges brought and prosecutions completed. In March 2011, Tanthawut Taweewarodomkul, was sentenced to 13 years in prison for allegedly violating both laws in material posted to Norporchorusa.com.

In May 2011 Joe Gordon, a Thai-American man, was charged under both laws for allegedly posting a link to a Thai translation of the English-language book, “The King Never Smiles”, by Paul Handley, on his website. In late November 2011, the trial of Mr. Somyos Prueksakasemsuk, long-time labour rights activist and editor of Voice of  Taksin and Red Power magazines, will begin. These are only several of many known, and perhaps many more unknown cases, of people charged under either article 112 and/or the Computer Crimes Act. In most article 112 and Computer Crimes Act cases, the court refuses to grant bail, and so those charged must also endure many months of pre-trial conviction.

Reporters Without Borders is shocked by the two-and-a-half-year sentence imposed on American blogger Joe Gordon by a Bangkok court today for insulting the Thai royal family and deplores the increase in so-called lèse-majesté crimes in Thailand.

“Although it means a reduction in his original penalty, we are shocked by this sentence, the latest in a long series of lèse-majesté convictions,”

“We are witnessing a game of one-upmanship in the penalties imposed on Thai netizens. Since it took office, the government of Prime Minister Yingluck Shinawatra has shown itself to be worse than its predecessor. In just four months, the number of allegations, prosecutions and convictions on lèse-majesté grounds is higher than for the whole of last year.

“The government must put an end to this repressive policy and repeal the lèse-majesté law and the Computer Crime Act, two anti-freedom pieces of legislation.

“We call on the authorities to release Joe Gordon and the many other netizens and journalists imprisoned for lèse-majesté and to call a halt to the prosecution of the director of the online newspaper Prachatai, Chiranuch Premchaiporn, better known by the online name Jiew, whose trial is still in progress.”

In a contradictory statement on 26 August, Deputy Prime Minister Chalerm Yubamrung said he was making the crime of lèse-majesté a priority. At the same time, there has been an increase in arrests and convictions.

Ampon Tangnoppakul, known as “Uncle SMS”, received a 20-year prison sentence on 23 November for sending text messages deemed to have insulted the monarchs. His case has now attracted international attention. The United States among others has expressed concern, saying such prosecutions violate the fundamental right to free expression.

Chiranuch faces a possible sentence of 20 years in prison under the Computer Crime Act for for failing to delete quickly enough comments posted on her blog last year that were “damaging to the monarchy” .

Somyos Prueksakasemsuk, former editor of the magazine Voice of Thaksin which was closed last year, has been held on remand for seven months for insulting the monarchy.

Several netizens are still in prison for lèse-majesté offences. Surapak Phuchaisaeng is still awaiting a verdict in his prosecution for messages he posted on Facebook. Thanthawut Thaweewarodomkul was sentenced on 15 March to 13 years in prison for articles he published on a website linked to the “Red Shirts” anti-government protesters, NorporchorUSA. The student blogger Norawase Yotpiyasathien, arrested on 5 August for his online posts, was freed on bail three days later.

Related Topics:lese majeste
Up Next