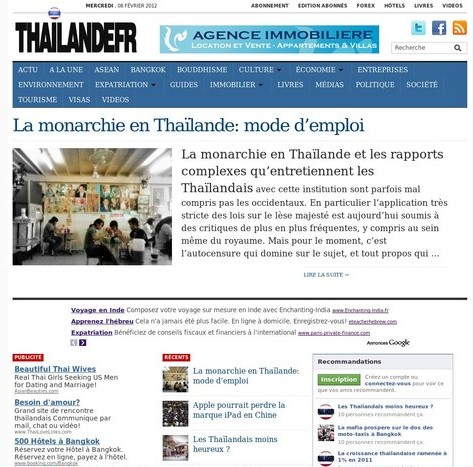 The Thailand page on the French travel website www.routard.com has crossed the seven million viewers mark, making it the top-ranked page amongst all the featured destinations, according to the website publisher Mr Philippe Damiani.

Another website, thailande-fr.com, dedicated to Thailand news has served 9.5 millions pages in 2011, with a record affluence  during the flooding months of 2011, from October to December.

Mr Damiani informed the Paris office of the TAT that the seven million mark was crossed on February 14, 2012, making Thailand the most popular destination to be viewed by prospective travellers accessing his website. Thailand led other destinations; such as, New York (5.2 million pageviews), Corsica Island (4.8 million), India (4.4 million) and Morocco (4.2 million).

“There is no doubt, that the Land of Smiles is popular among French travellers and backpackers,” Mr Damiani said. “It is not difficult to see why. Thailand has many attractions that appeal to French travellers – its rich culture and heritage attractions in the North, the beautiful beaches of the South, a bustling capital with its excellent shopping, an unparalleled sense of hospitality and delicious food … all at unbeatable prices. What could be better?”