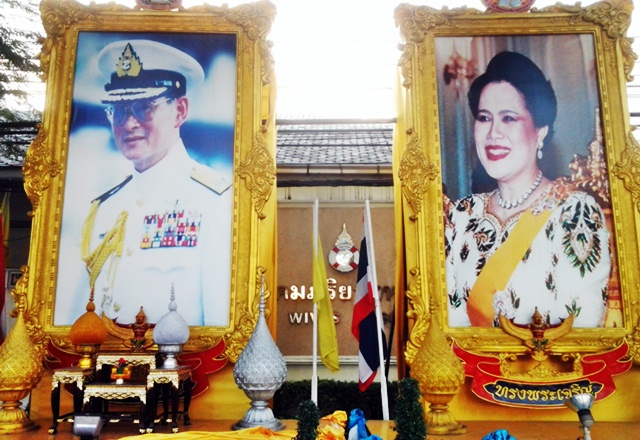 A 10-year prison sentence adds to the grim litany churned out by the Thai courts under Article 112 of the penal code that protects the royal family, and whose application leads to  growing criticism among international organizations such as the UE, UN and various NGOs.

Somyot was first arrested during the street protests by the United Front for Democracy against Dictatorship (UDD) “Red Shirts” against the government of then-prime minister Abhisit Vejjajiva. On April 26, 2010, the government’s Center for the Resolution of Emergency Situations (CRES) put Somyot and his magazine on a chart containing names of individuals and groups whom it accused of being “anti-monarchy.” The CRES never offered any credible evidence to substantiate this allegation.

In Thailand the king is pictured everywhere and the royal family is protected by very harsh lese majeste law. Offenders can be sentenced up to 15 years in prison for defaming the king or his image.

Somyot was affiliated to the United Front for Democracy against Dictatorship (UDD), the movement also known as the Red Shirts, some of whose members support former Prime Minister Thaksin Shinawatra.

He has been held since 30 April 2011 in the eastern province of Sa Kaeo, 2 days after he participated to the launch of a campaign to collect 10,000 signatures to remove the lese majeste article from the Thai criminal code. He was later reproached to refuse to reveal the identify of the author of the two articles, written under the pen-name of Jitra Polachan.

The United Nations human rights chief today condemned the harsh conviction of an editor and activist in Thailand for publishing two articles considered to be critical of the monarchy, and stressed that this puts at risk freedom of expression in the South-east Asian country.

Somyot Pruksakasemsuk was convicted of lese-majesty offences for his two articles that were published in his Voice of Takshin magazine. Lese-majesty, “injured majesty” in English, is an offence against the dignity of a reigning sovereign or against a State.

“The conviction and extremely harsh sentencing of Somyot sends the wrong signals on freedom of expression in Thailand,” said the UN High Commissioner for Human Rights, Navi Pillay. “The court’s decision is the latest indication of a disturbing trend in which lese-majesty charges are used for political purposes.”

Mr. Pruksakasemsuk was sentenced to 11 years in prison for the breach of article 112 of Thailand’s criminal code, which states that “whoever defames, insults or threatens the King, the Queen, the Heir-apparent or the Regent, shall be punished with imprisonment of three to fifteen years.”

Reporters Without Borders is outraged by the 11-year jail sentence that a Bangkok criminal court passed today on Voice of Thaksin magazine editor Somyot Prueksakasemsuk on lèse-majesté charges for publishing two articles by another person in 2010 that were deemed to have defamed the king and the monarchy.

“This sentence is a nothing less that a political manoeuvre designed to silence a government critic,” Reporters Without Borders said. “The fact that the complaint about the supposedly defamatory articles was not filed until several months after Somyot’s arrest proves that the authorities wanted his head and just needed a pretext to jail him.

“We demand Somyot’s immediate release and the overturning of this conviction, and we urge the entire international community to react to this trial, which is a direct attack on media freedom in Thailand. The lèse-majesté law and article 112 of the criminal code must be repealed.”

Human Rights Watch said that Thai authorities used Somyot’s pretrial detention as a means to punish him for his views. Somyot was denied bail eight times during the course of his 20-month pretrial detention. He was compelled to appear in shackles in hearings in four different provinces for the same alleged offense, even though all the witnesses resided in Bangkok. Somyot told Human Rights Watch that he had been transported in shackles to witness hearings in Sa Kaeo, Petchabun, Nakorn Sawan, and Songkhla provinces, during which he had to stand up throughout the journeys in an overcrowded truck without access to toilet facilities, aggravating his medical conditions, which include hypertension and gout.

From 1990 to 2005, the Thai court system received only about four or five lese majesty cases per year. In the period from January 2006 to May 2011, however, there was a surge when more than 400 cases were brought to trial. While the prosecutions for lese majeste have declined since Yingluck Shinawatra took office in 2011, Thai authorities continue to use draconian statutes in the Penal Code and the Computer Crime Act to restrict freedom of expression, including on the internet. Thousands of websites have been blocked as “offensive to the monarchy.”