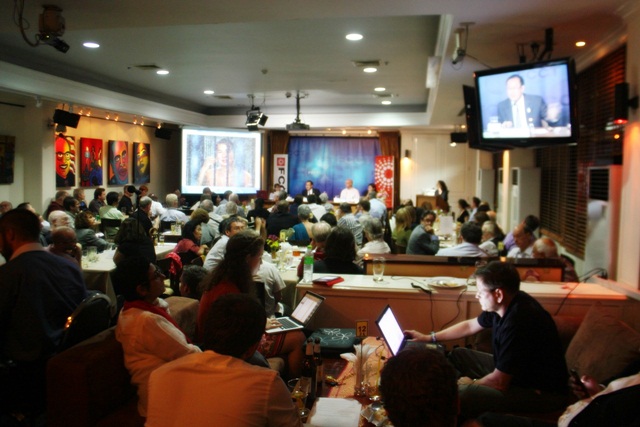 The 10 year jail term handed down to magazine editor Somyot Pruksakasemsuk this month, under Thailand’s Article 112, has drawn wide concern from, among others, the UN, the European Union, various NGOs and the media community.

While the number of prosecutions for lese majeste has slightly declined since Yingluck took office, Thai authorities continue to use draconian statutes in the Penal Code and the Computer Crimes Act to restrict freedom of expression, including on the internet. Thousands of websites have been blocked as “offensive to the monarchy.”

People charged with lese majeste offenses were often denied bail and remained jailed for many months awaiting trial. Sentences have often been harsh. Amphon Tangnoppakul, who was sentenced in November 2011 to 20 years in prison for sending four lese majeste SMS messages in 2010, died of cancer in prison on May 8, 2012.

UN High Commissioner for Human Rights Navi Pillay said “The court’s decision is the latest indication of a disturbing trend in which lèse-majesté charges are used for political purposes.”

Reporters Without Borders in a statement said “We… urge the entire international community to react to this trial, which is a direct attack on media freedom in Thailand. The lèse-majesté law and article 112 of the criminal code must be repealed.”

Bob Dietz, Asia program coordinator for the Committee to Protect Journalists, in a statement said “Somyot’s harsh sentencing represents the latest abuse of lèse-majesté laws to stifle freedom of expression in Thailand.”

The Bangkok Post quoted the chief judge of the Criminal Court Thawee Prachuablarb, as saying

“There have been criticisms, rather one-sided, that the court was too harsh in its judgement but… It is mid-way between the minimum sentence under this law, which is three years, and the maximum punishment of 15 years. The court made its ruling in accordance with the law.”

“The court’s procedure showed the articles which Mr Somyot published did not contain academic views of the monarchy. The articles were insulting in nature and caused damage to the King.”

Indeed the magazine Mr Somyot edited was deeply political. Accordingly, the sentence is inevitably also seen through the prism of Thailand’s political divide, and there are also sections of the Thai public who believe he deserved the sentence he was handed. The Court’s view was that he would have known the two articles in question were taking aim at the Monarchy, and went ahead and published them anyway.

There are wider, complex issues: The law itself; the chorus in some quarters to abolish or amend it; and the impact it may have on the Monarchy that it was promulgated to protect. To discuss the implications of the Somyot case and the use of Article 112, the FCCT hosted a panel discussion with:

Recounting her three arrest in Thailand Chiranuch Premchaiporn shared an emotional moment with the audience during the debate hosted by the FCCT in Bangkok:

I was arrested three times, in my office and at the airport, but I never wrote anything myself. I don’t think this is normal practice. I did not write any articles, and no name has ever been cited. It is only interpretation and speculation.

In Thailand, the government of Prime Minister Yingluck Shinawatra has politicized efforts to hold accountable those responsible for political violence in 2010. It cracked down on the free expression rights of people deemed critical of the monarchy. And it took no action against security forces who reacted to insurgent atrocities with abuses in the southern border provinces. The government pushed ethnic Rohingya “boat people” back to sea, and failed to provide protections for the many unauthorized Burmese in the country.

“The Yingluck government’s response to the 2010 political turmoil has been to repeat its predecessor’s mistake by seeking a one-sided ‘victor’s justice,’” said Brad Adams, Asia director at Human Rights Watch. “For Thailand to gain credibility on rights, leaders need to show a resolve to treat serious problems impartially and with respect for the rule of law.”

“The lese majeste and Computer Crime Act bring a climate of fear over all political speech in Thailand, whether in print or on social media,” said Adams. “The government needs to take action to prevent Thailand’s space for free speech from diminishing further.”

From 1990 to 2005, the Thai court system received only about four or five lese majesty cases per year. In the period from January 2006 to May 2011, however, there was a surge when more than 400 cases were brought to trial. While the prosecutions for lese majeste have declined since Yingluck Shinawatra took office in 2011, Thai authorities continue to use draconian statutes in the Penal Code and the Computer Crime Act to restrict freedom of expression, including on the internet. Thousands of websites have been blocked as “offensive to the monarchy.”

How To Make A Viral Video ?