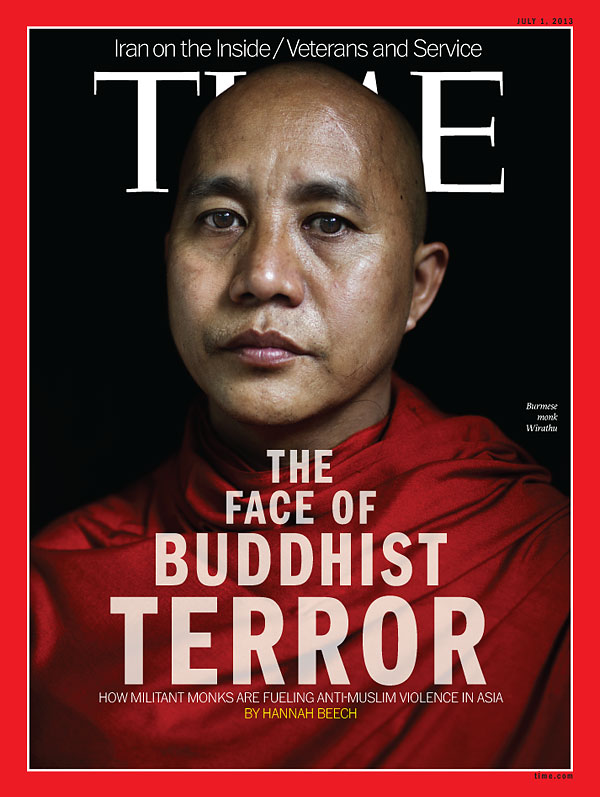 Reporters Without Borders condemns the decision by Burmese magazine distributor Inwa Publications not to sell Time Magazine’s July issue, which has cover story about the Burmese Buddhist monk Ashin Wirathu headlined “The Face of Buddhist Terror.”

In the reckoning of religious extremism — Hindu nationalists, Muslim militants, fundamentalist Christians, ultra-Orthodox Jews — Buddhism has largely escaped trial. To much of the world, it is synonymous with nonviolence and loving kindness, concepts propagated by Siddhartha Gautama, the Buddha, 2,500 years ago. But like adherents of any religion, Buddhists and their holy men are not immune to politics and, on occasion, the lure of sectarian chauvinism.

The media freedom organization is also appalled by the government’s endorsement of this censorship and calls for the ban to be lifted at once.

“By taking this decision, Inwa Publications went far beyond its role as a distributor and abusively assumed politically-motivated censorship powers, going so far as to argue that this was justified by the recent closure of the government office for prior censorship, the PSRD,” Reporters Without Borders said.

“As Time Magazine’s sole distributor in Burma, this privately-owned company is violating media freedom and the Burmese public’s right to information. We are also extremely disturbed by the government’s subsequent decision to ban Time Magazine’s sale in any form. At a time when Burma’s media law is still being drafted, it reflects an attitude that is completely contrary to the fundamental principles that should govern media law reform.

“It shows that there has been no change in the government’s desire to control news and information and to assume the right to apply prior censorship whenever it deems this to be necessary. This is an unacceptable step backwards for media freedom in Burma. The authorities must rescind this decision and face the problems head-on.”

Deputy information minister Ye Htut, who is also spokesperson for the president’s office, announced today that Time Magazine was banned from social networks. A press release to this effect was then read out on state-owned television.

In a message posted on Facebook, Ye Htut said: “The article entitled ‘The Face of Buddhist Terror’ in Time Magazine 1 July issue is prohibited from being produced, sold or and distributed in original copy or photocopy in order to prevent further racial and religious conflicts.”

The president’s office objected to the juxtaposition of the words “Buddhist” and “terror,” saying it “creates a misunderstanding of Buddhism” and undermined efforts to defuse tension after violence in which many civilians have died or have been driven from their homes.

Inflammatory comments by Ashin Wirathu, the Buddhist monk on Time Magazine’s cover, have been the subject of growing media attention after months of mounting sectarian violence. Referring to Burma’s Muslim minority, he recently said: “You can be full of kindness and love, but you cannot sleep next to a mad dog.”

Reporters Without Borders released a report on the threats to freedom of information after inter-communal violence first erupted in the western state of Arakan in May 2012.

Many foreign media and some Burmese media that recently returned to Burma from exile, such as Democratic Voice of Burma, have been the target of frequent attacks by the Burmese media and the Buddhist majority, which accuse them of biased coverage of the sectarian violence.

After the first wave of violence, the government resorted to threats and increased control of the media in an attempt to curb reporting and hate comments online, showing no hesitation about returning media freedom to the same abysmal level that prevailed before the first reforms in 2011.

After discussing the problems linked to the lack of information about the violence, the European Parliament passed a resolution on 13 June urging the Burmese authorities to allow journalist unrestricted access to sensitive regions including the western state of Arakan, where Rohingya Muslims are in the majority.

Read the special report entitled “Crisis in Arakan state and new threats to freedom of information” that Reporters Without Borders published on 28 June 2012.