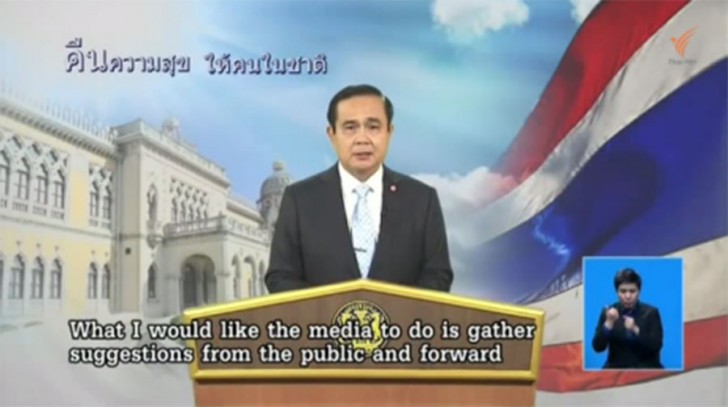 Thailand’s ruling Prime Minister Gen Prayut Chan-o-cha warned opponents to stop inciting rifts, and media members not to over  exercise their freedom  as it could do more harm than good to the country

“I would like members of the media no matter they be station owners, editors, reporters, news anchors, publishers  to understand the current situation. If you enjoy press freedom with no boundary, it would do more harm than good for the country,”  he said.

His warning was repeated again when he spoke to the people during his weekly “Returning Happiness to the People” TV programme on Friday night.

In slightly over an hour address, Gen Prayut began by expressing his condolences for the nine army officers died in  helicopter crash in Phayao province

He turned to his government’s reform effort with concern that it still encountered obstacles at different levels.One obstacle he saw was news media reporting.

He then warned that “freedom of the press” had its limits, citing  some social media commentary were hurting the cause of reconciliation.

He asked that media members  express their views with regard to appropriateness.

Input was welcomed, but that they must  not“propagate new conflicts and deepen old wounds in the society to the point that the government is unable to work for the public, he said.He said people should  refrain from being quick to judge or take action purely based on emotions or feelings, otherwise such action would bring about more disputes.

But he assured that the government and the military junta have never thought of using force toward the press, but all they were asking for  is your cooperation and respect for the law.

Making groundless accusations is  counterproductive and there are special laws in effect now.

Gen Prayut said the media can support national reform by adhering to the principle of reporting factual news, and then he would be happy to listen to every media member.

But they must refrain from instigating further hatred within the society, he said

Discussing protests against the coup and the junta, Gen Prayut said he was not upset by them but would ask for peace among them  to move this country in a prosperous direction.

He said. “We will never use force against you, so there is no need for you to be violent. Thailand today needs peace and unity as to create national stability.

“If you dislike or disagree with something please let me know and I will look into it immediately,” he pledged.

On economic issues, the premier reiterated  plans to improve the quality of lives of Thai people, get the country ready for the integrated Asean Economic Community next year, support Thai businesses in terms of technology and new market penetration, promote trade and investment from abroad, and help farmers in a sustainable manner.

How Facebook Swalloded journalism and is eating the world