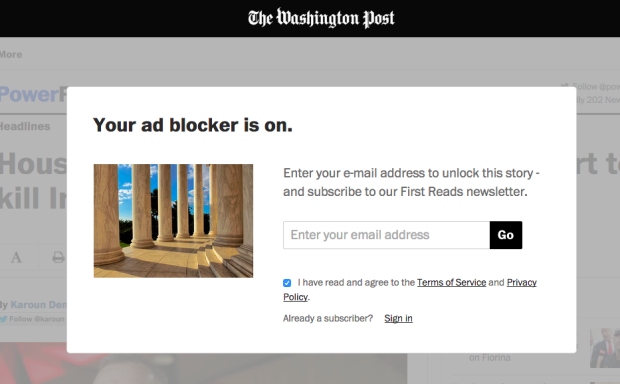 There’s a debate raging among online publishers whether or not visitors who use Adblock to block ads with should be blocked from accessing their websites.

On one side of the debate are major publishers like Forbes, Washington Post and German mega-publisher Axel Springer, who have  blocked ad-blockers by varying degrees with large ‘Not Welcome’ screens that ask readers to disable their ad-blocker in exchange for website access — or in exchange for an “ad reduced” or “ad light” experience.

On the other side of the debate are a chorus of pundits who present a laundry-list of reasons for why publishers should welcome all readers — whether or not those readers block ads.

One of the more persistent reasons given for why publishers should allow Adblock readers to continue to access their content is that an ad-blocking readers still have some value other than the obvious monetizable value of advertising views, clicks or taps.

Is there value outside of ad views?

Web publishers have long had alternative revenue models other than traditional ‘banner’ advertising.

But despite the broad range of potential ways to monetize content, traditional advertising is still by far the largest source of revenue for the majority of traditional online publishers. Streaming services and apps whose ads can be more difficult to block have fared better than traditional online publishers in transitioning to paid-content models.  While traditional-media giants like the New York Times have long struggled to build premium online subscribership in an ocean of non-premium competitors.

Source: What are visitors who use Adblock worth?

How Facebook Swalloded journalism and is eating the world