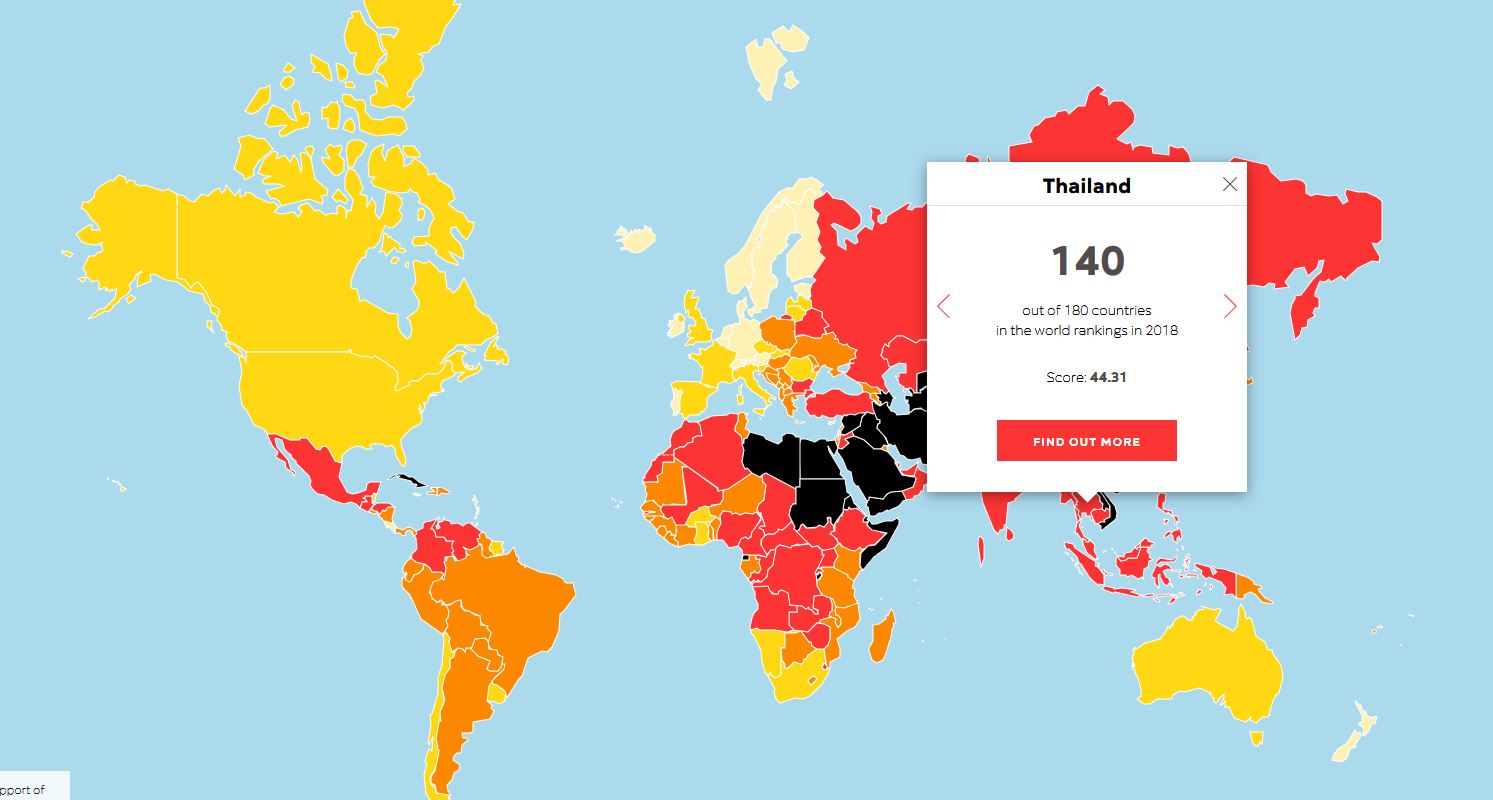 The Chinese model of state-controlled news and information is being copied in other Asian countries, especially Vietnam and Cambodia. North Asia’s democracies are struggling to establish themselves as alternative models.

Violence against journalists is increasingly worrying in Afghanistan, India, Pakistan and the Philippines.

The Asia-Pacific region still has the world’s worst violator of the freedom to inform: North Korea (180th). The recent widespread adoption of smartphones in North Korea has unfortunately been accompanied by draconian control of communications and the national intranet.

The state news agency KCNA is the only authorized source of news for all of the country’s media. Just reading, viewing, or listening to a foreign media outlet can lead to a spell in a concentration camp.

The other fall in the region that speaks volumes is Myanmar’s (down six places at 137th). In the past year, the government led by Aung San Suu Kyi has lost all credibility as regards its obligation to defend the role of the media in a functioning democracy.

The worst violations took place after the start of the Rohingya crisis in August 2017. The international community now knows that “elements of genocide” and “ethnic cleansing” occurred, to use the UN’s terms. But proper reporting on this tragedy from within Myanmar is still impossible because the military continue to deny access. Two Reuters reporters who tried to investigate are still in prison.

Myanmar’s coverage of the Rohingya crisis has been marked by the growth of hate messages on social networks, especially Facebook.

Any journalist who does not fall in with the prevailing anti-Muslim discourse is subjected to violent verbal harassment by Buddhist extremists. This has done much to encourage self-censorship within the media.

More censorship and surveillance in China

Unchanged at 176th in the Index, Xi Jinping’s China is getting closer and closer to a contemporary version of totalitarianism. During President Xi’s first term, censorship and surveillance reached unprecedented levels thanks to the massive use of new technology. Foreign reporters are finding it harder to work and ordinary citizens can now be jailed just for sharing content on a social network or during a private chat on a messaging service.

More than 50 professional and non-professional journalists are currently detained in China, many of them the victims of mistreatment and a lack of medical care that poses a threat to their lives. Liu Xiaobo, a Nobel peace laureate and recipient of RSF’s Press Freedom Prize, and the dissident blogger Yang Tongyan both died last year from cancers that were left untreated in detention.

Internationally, the Chinese government is trying to establish a “new world media order” under its influence, by exporting its oppressive methods, information censorship system and Internet surveillance tools. Its unabashed desire to crush all pockets of public resistance unfortunately has imitators in Asia.

This is particularly so with Vietnam, which at 175th is just one place above China in the Index. Its traditional media are completely controlled, but citizen-journalists defend the freedom to inform with great courage, and the government’s response has been merciless. Bloggers used to be sentenced to two years in prison, but now those who blog about banned subjects such as corruption or environmental disasters can expect a 15-year jail term.

Cambodia, another country that seems to be taking the dangerous Chinese road, has fallen 10 places in the Index to 142nd, one of the biggest falls in the region. Prime Minister Hun Sen’s regime launched a ruthless offensive against media freedom in 2017, shutting down more than 30 independent media outlets and jailing several journalists in a completely arbitrary manner.

His suppression of independent voices, his increased dominance of the mass media and his meticulous control of social media are a disturbing echo of the methods used in China, which has invested millions of euros in Cambodia’s pro-government media. The Chinese model’s influence is also felt by the media in Thailand (140th), Malaysia (145th) and Singapore (151st).

Hate speech is also an issue in the continent’s other giant, India, which has fallen another two places to 138th. Ever since Narendra Modi became prime minister in 2014, Hindu fundamentalists have been referring to journalists in extremely violent terms.

Any investigative reporting that annoys the ruling party or any criticism of Hindutva, an ideology that blends Hindu nationalism with an almost fascistic rhetoric, elicits a torrent of online insults and calls for the death of the reporter or writer responsible, most of it coming from the prime minister’s troll army.

This unbridled verbal violence serves to support a leader who asserts himself as a strongman, a leader whose authority does not tolerate being undermined by reporters or editorialists.

As elsewhere in the world in 2017, this verbal violence has tragically led to physical violence. The newspaper editor Gauri Lankesh was gunned down outside her home in September after being the target of hate speech and death threats for criticizing Hindu supremacy, the caste system and discrimination against women.

“sons of whore journalists”  will not be spared (Rodrigo Duterte)

The physical violence against journalists is largely responsible for India’s low ranking. At least three journalists were murdered in connection with their work. More were killed in circumstances that were unclear, as is often the case in rural areas, where reporters are poorly paid. The situation in the Kashmir Valley, a news black hole, contributed to the poor ranking of a country whose long tradition of vibrant media could nonetheless enable it to rise again in the Index.

In the Philippines, down six places at 133rd, the dynamism of the media has also been checked by the emergence of a leader who wants to show he is all powerful.

President Rodrigo Duterte lost no time in warning the “sons of whore journalists” that they would not be spared.

There have been countless examples of Philippine government harassment of media that voice any kind of criticism of Duterte’s “war on drugs.” Here again, verbal violence and physical violence are closely linked. With four journalists murdered in connection with their work in 2017, the Philippines is one of the continent’s deadliest countries.