Thailand is attracting a growing number of tourists from ‘sexually repressed’ nations, mainly from Middle East countries, but complaints by sex workers of violence and theft abound.

In Pattaya’s Arab quarter, off the Thai sex capital’s famous Walking Street, a Kuwaiti man climbed down from the bar where he had been dancing for 10 minutes and rejoined his friends at their table.

Thailand is attracting a growing number of tourists from ‘sexually repressed’ nations, mainly from Middle East countries, but complaints by sex workers of violence and theft abound. 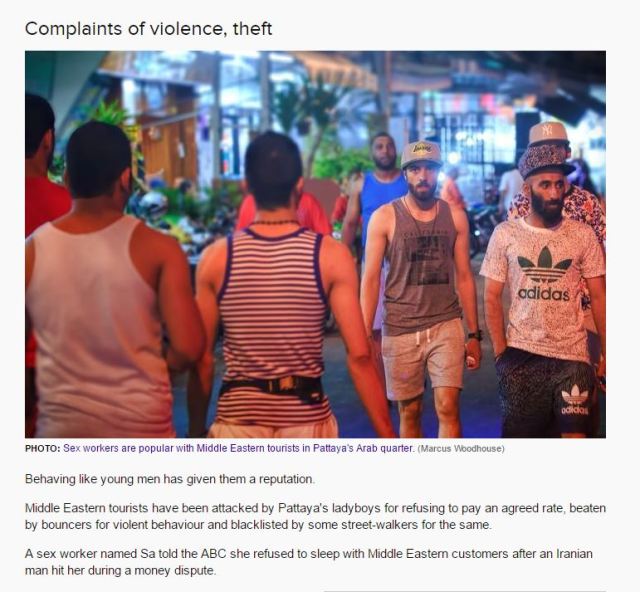 They were drinking Chivas Regal by the bottle and each was accompanied by a Thai “date”. He immediately pulled his companion onto his lap.

When asked why so many young Middle Eastern men chose Pattaya for their overseas vacations, Fahad, 29, grabbed his crotch with both hands, shook vigorously, and laughed.

“Thailand is very different to Kuwait, In Kuwait, we cannot even look at a woman,” he said.

Kuwait to toughen stance while giving docus to bedoun

Kuwait plans to toughen its stance when it comes to issuing passports to stateless people residing in the country following the murder of a Kuwaiti citizen in Thailand, reports Al-Anba daily.

The victim, a Kuwait Army officer, was stabbed to death during a brawl Saturday at a cafe in south Pattaya with two men described as ‘bedoun’. “Under the new measures, we will give passports only to those who need them for studies or medical treatment abroad, overseas business deals or to go to Makkah for Umrah or Hajj,” Sheikh Mazen Al-Jarrah, Assistant Undersecretary for Citizenship and Passports Affairs, told the daily.

“We will not give passports to those who want to travel abroad for tourism or other purposes,” Al-Jarrah added.

He said the decision is fully consistent with the right of free movement. The senior officer added passports already granted to bedoun will not be revoked.

These passports, he said, are just travel documents and not proof of citizenship. “However,” he went on to say,

“When they (the bedoun) will apply to renew their passports, we will assess their need. They will be renewed only for those who need them under the new categories,” he added.

“We are fully committed to human rights and the rights to travel. However, the bedoun who do know their origins should regularize their situation and obtain their passports from their countries of origin.

They know perfectly well where they come from. We are not obliged to hand passports to those who are not Kuwaitis,” the daily quoted him as saying.

The new measures will be applied to the two presumed killers of the Kuwaiti army officer. “They committed a crime in a country and they will be tried and sent to jail for a long time there. By then, their passports will be expired and they will not be allowed back into Kuwait. They will have to go to their country of origin,” he said.

The presence of approximately 110,000 bedoun – although the exact figure is not available — living in Kuwait has been one of the thorniest issues in the country despite efforts to reach satisfactory solutions.

However, the Kuwaiti authorities insist only 34,000 “illegal residents” — as they are called — qualify for consideration for citizenship, while the others are first generation immigrants, mainly from Iran, Iraq, Saudi Arabia and Syria, who moved to Kuwait following the discovery of oil.

It is believed that many bedoun who had moved to Kuwait in the 1960s and 1970s concealed their nationality in order to remain in Kuwait.

The Kuwaiti citizenship is transferred only through the father and the children of bedoun men who marry Kuwaiti wives cannot obtain the Kuwaiti nationality.

In 2012, under a scheme to help address the issue, the Kuwaiti authorities said the bedoun staying illegally in Kuwait can be granted five year residence permits by producing the passport of their country of origin to help regularize their situation.

The new status allows those above 21 years of age to sponsor themselves for the next five years. Those who are below 21 are granted a five-year residence visa as family members. Beneficiaries of the scheme do not pay fees for the duration of their permits and are given special cards that guarantee them free health and education services.