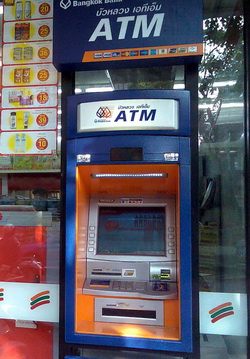 The management of Thailand’s commercial banks are permitted to instruct an immediate halt to ATM services or the operations of bank branches in risk-prone areas without prior consent from the central bank,  according to Bank of Thailand (BoT) Deputy Governor Krirk Vanikkul.

The BoT decision was made amid mounting rumors that the planned mass rally by anti-government Red Shirt demonstrators on March 14 might turn violent and lead to a destruction of ATM booths or bank branches, particularly in risk-prone areas.

Normally, commercial banks must report to the central bank first if they have to decide on the closing of bank branches or ATM booths, but in case of emergency, the central bank is allowing the banks to make the decision and report it later to ensure safety of their employees and property

Under a contingency plan to ensure the safety of commercial banks which the BoT discussed with bank executives, he said, the central bank allows bank executives to halt ATM services or branch bank operations immediately in case of emergency.

Unemployment rate in Thailand dropped to only 1% in Q4