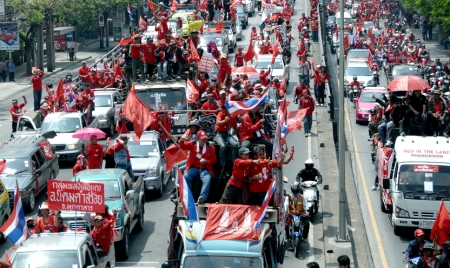 An Assumption University ABAC poll conducted during Saturday’s motorised march criss-crossing the Thai capital has found that nearly 90 per cent of respondents want the government and the anti-government Red Shirts to resolve the conflict through negotiation.

ABAC Poll director Noppadol Kannikar said the survey, conducted among 1,082 residents in Bangkok and another 16 provinces nationwide, found that 89 per cent of the interviewees want the government and the anti-government protesters to hold talks, to ease the ongoing political conflicts for the country and the public.

Nearly two thirds– slightly over 64 per cent– think that the demonstration of the United Front for Democracy against Dictatorship (UDD) demonstrated the power of the people to exercise their rights in line with democracy, but an overwhelming three out of four– 76 per cent–  disagreed with the coup.