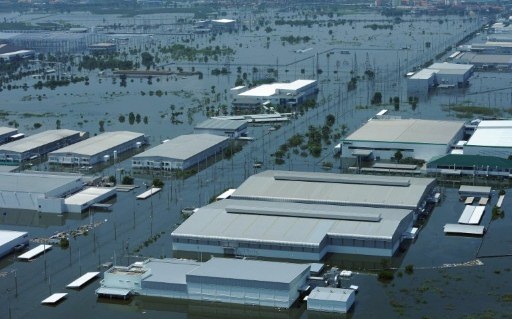 Initial damages from the flood crisis on the Thai economy are likely to exceed 400 billion baht, excluding successive impacts and chain of effects to providing goods and service to customers, said Pornsil Patchritanakul, Deputy Secretary-General of the Board of Trade of Thailand.

If flooding hits Bangkok’s business areas, the damage could climb another 120 billion baht per month, as the capital’s Gross Domestic Product GDP is about one trillion baht each year.

Japanese businesses are among the hardest-hit. Figures from the Japanese Embassy in Bangkok show that at least 400 Japanese factories have been inundated in six industrial estates in Ayutthaya and Pathum Thani. Picture: MCOT News

Mr Pornsil said he wanted to see the government manage the flood problem systematically and build investors’ confidence by pledging a future safe from flooding.

Meanwhile, Mr Payungsak Chartsutipol, Chairman of the Federation of Thai Industries FTI said the initial damage on the industrial sector, after seven large industrial estates were submerged, was about 300-400 billion baht and the hardest hit industries were auto and auto parts, electrical appliance and electronics.

Losses from a trading halt of automobile and electrical appliance businesses and other businesses were about 100 billion baht per month. The damages also depend on how long flood will last.The FTI planned to meet entrepreneurs from flood-hit industrial estates, the Japan External Trade Organization, or JETRO and Japanese Chamber of Commerce on Oct 26 to discuss assistance in draining the flood water from industrial estates after the flood level was stable.

The FTI will also set up a team to oversee integrated rehabilitation.Ninnart Chaithirapinyo, FTI’s honorary chairman of the Automotive Industry Club said the current flood has more impact on the Thai auto industry than with the tsunami in Japan in March when auto production dropped by 30 per cent.

via Ongoing flood has caused economic losses of over Bt400bln so far: Thai Chamber of Commerce.

Flooding Situation Unlikely to be Critical in Bangkok