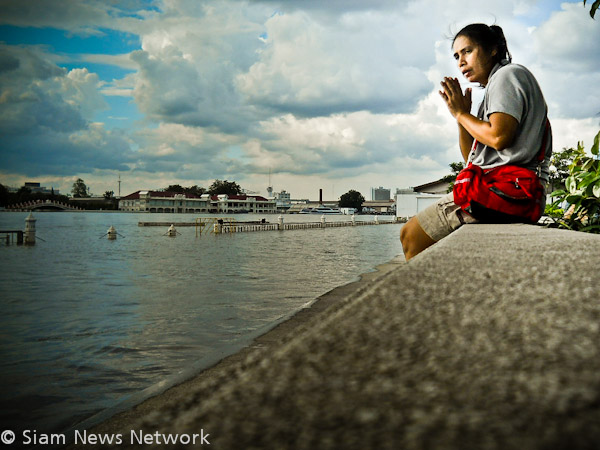 Since more flood water has been drained out from various canals in Bangkok to the sea, Prime Minister Yingluck Shinawatra believed that flooding in the city was unlikely to reach a critical stage.

Speaking at the Flood Relief Operations Center at the Energy Complex on Vibhavadi Rangsit Road, the Prime Minister revealed that the flooding situation in the city remained stable and if there were no more breached flood barriers, the situation would improve gradually after recent high tides.

She said that the runoff from the North continued to head toward Bangkok, but it would not come in an enormous amount at the same time. Water management is being carried out to ensure that the flood water will not enter Bangkok quickly. The Government is accelerating water drainage in both the eastern and western parts of the city, although water diversion in the western part has been quite difficult.People have been urged to be vigilant for the upcoming two periods of high tides, one between November 11 and 17 and the other, from November 25 to 30.

A report from the Flood Relief Operations Center said that, in the overall picture, the flood water from the North passing through Nakhon Sawan province is decreasing. The Royal Irrigation Department is now able to bring down the water level in the Chao Phraya Dam, and this will help reduce the water level in Bangkok. From November 3 to 15, the Ministry of Agriculture and Cooperatives will tackle the problem of beached flood barriers in various areas and reinforce embankments to cope with the upcoming high tides.

According to the Prime Minister, the Government has prepared an initial fund of 80 billion baht to provide urgent rehabilitation for affected individuals, small businesses, and farmers. The banking sector would extend more than 300 billion baht in credit to bring quick recovery to industrial estates. She pointed out that post-flood rehabilitation could take at least three months.

As for affected Japanese investors, she said, the Government would provide them with assistance in various forms.President of TOT Public Company said that TOT had set up a center to monitor the flooding situation and look after its communication networks, so that the public and businesses would be able to continue to use them without disruption. TOT teams of engineers are working around the clock to help solve technical problems in the communication and telecommunication systems.

The hotline of the TOT contact center is 1100.As many areas of Bangkok and its vicinity are suffering from floods, the Expressway Authority of Thailand decided to extend the free use of its three expressways, from November 1 to November 14. The three tollways are from At Narong-Ram Intra to Lam Lukka, known as Chalong Rat; from Bang Na to Chon Buri, referred to as Burapha Withi; and from Bang Phli to Suk Sawat, known Kanchanaphisek. Motorists are not allowed to park their cars on expressways, which are used as transportation routes to send supplies and equipment to help flood victims.

via Inside Thailand — Flooding in Bangkok Unlikely to Reach a Critical Stage.

Flooding in Bangkok to Persist for One Month