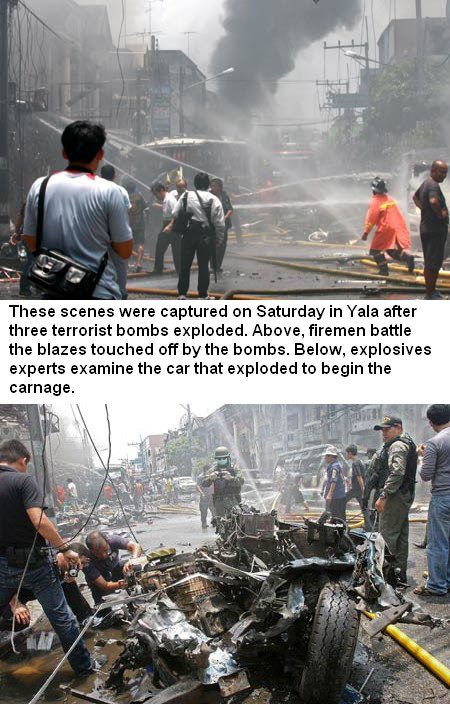 The Thai capital, Bangkok and the Bangkok Metropolitan Administration (City Hall, the BMA) is on high alert with increased security measures set for this month’s Songkran festival April 12-15.

The BMA’s precautions are meant to prevent any violence after last weekend’s car bomb attacks in Yala and Songkhla, according to a senior City Hall official.

Thousands of Bangkokians will travel to the provinces, while many visitors will flow into the capital for the festivities, he said.

The BMA’s law enforcement contingent staff will also be on duty at bus terminals, shopping and tourist centres, and other areas considered to be at possible risk.

Chiang Mai Governor Panadda Disakul said the province was also stepping up security measures. Security will be heightened at all gateways to the province—by road, rail and air.

Provincial agencies will report on a daily basis, said the governor, who urged the public to help the authorities by noting and reporting irregularities. (MCOT online news)

Gen Chatchai told reporters after two hours the meeting agreed on measures including checkpoints on four main roads and at least 40 minor roads on a 24-hour basis.

Hat Yai city centre will be zoned and vehicles using CNG and LPG gas will not be allowed in basement car parks of hotels and shopping centres.

Closed circuit television monitors will be serviced to ensure they work properly, and security staff will be trained to better notice suspicious vehicles and falsified registration plates.

Mr Surachai said that the car bomb attack at the Lee Gardens Plaza Hotel on April 1 which killed three, including two Malaysians, and wounded over other 350 tourists and shoppers has cost at least Bt800 million in damages as virtually all domestic tourists have cancelled their stays in the province, while Malaysians have partially cancelled.

The Songkhla business sector urged the government to prepare Bt10 million individual insurance coverage in case of terrorist attack to build confidence among tourists and security measures should be stepped up at important locations, particularly at the airport.