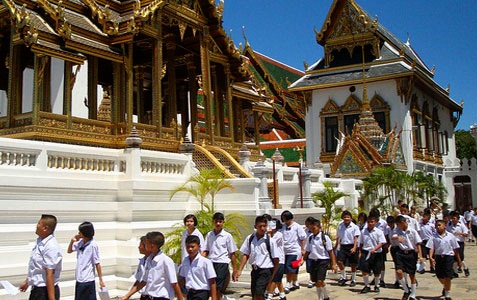 The continuing political strife overshadowed the news, reported in the Bangkok Post and elsewhere, that Thailand’s education system was ranked thirty-seventh out of forty developed nations in a global ranking of education systems produced by publishing house Pearson.

This is just the latest confirmation that the country’s education system, which was fine for producing widespread basic literacy in the 1950s, 1960s, and 1970s, and producing workers for low-end manufacturing, construction, and agriculture, is failing badly to keep pace in the global economy.

Thailand has been slipping behind regional competitors like Vietnam in terms of producing workers competent in English and high-tech skills, and with the introduction of Myanmar into the global economy, a country whose universities had basically been shut for years, Thailand will face even tougher competition in lower-end manufacturing than it already does.

Yet the Thai education system continues to prioritize rote learning, offers weak instruction in English, and provides low social status to teachers. In addition, in the deep south, where an insurgency is raging, many schools are closed altogether, and the government has not figured out an effective way to protect teachers.

Finland took first place with a score of 1.26 points, followed by South Korea and Hong-Kong. Following them are two other Asian countries: Japan and Singapore.

Thailand scored badly, with 1.46, and had only three countries below it in the ranking.

The United States places 17th in the developed world for education, according to a global report by education firm Pearson.

Finland and South Korea, not surprisingly, top the list of 40 developed countries with the best education systems. Hong Kong, Japan and Singapore follow. The rankings are calculated based on various measures, including international test scores, graduation rates between 2006 and 2010, and the prevalence of higher education seekers.

The study’s findings echo years of rankings that show foreign students outpacing their American peers academically. Students in Shanghai who recently took international exams for the first time outscored every other school system in the world. In the same test, American students ranked 25th in math, 17th in science and 14th in reading.

1. There are no magic bullets: The small number of correlations found in the study shows the poverty of simplistic solutions. Throwing money at education by itself rarely produces results, and individual changes to education systems, however sensible, rarely do much on their own. Education requires long-term, coherent and focussed system-wide attention to achieve improvement.

2. Respect teachers: Good teachers are essential to high-quality education. Finding and retaining them is not necessarily a question of high pay. Instead, teachers need to be treated as the valuable professionals they are, not as technicians in a huge, educational machine.

3. Culture can be changed: The cultural assumptions and values surrounding an education system do more to support or undermine it than the system can do on its own. Using the positive elements of this culture and, where necessary, seeking to change the negative ones, are important to promoting successful outcomes.

4. Parents are neither impediments to nor saviours of education: Parents want their children to have a good education; pressure from them for change should not be seen as a sign of hostility but as an indication of something possibly amiss in provision. On the other hand, parental input and choice do not constitute a panacea. Education systems should strive to keep parents informed and work with them.

5. Educate for the future, not just the present: Many of today’s job titles, and the skills needed to fill them, simply did not exist 20 years ago. Education systems need to consider what skills today’s students will need in future and teach accordingly.