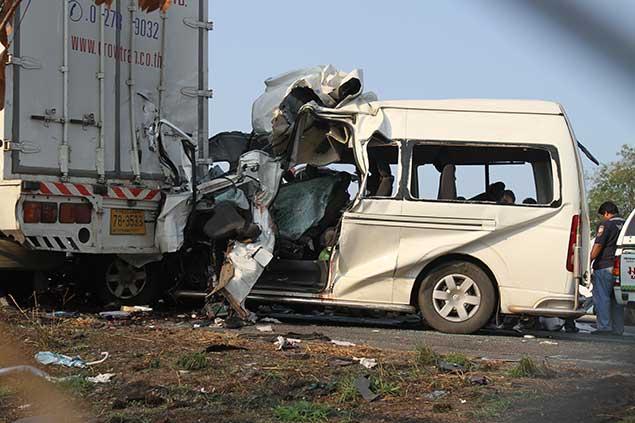 The Thai government’s Road Safety Centre — the centre which every year in this season swings into action to prevent and reduce the number of the road accidents, deaths and injuries during the 2013 New Year holiday period opened today.

Pol Lt-Gen Chat Kuldilok, Deputy Minister of Interior, presided over the the opening ceremony of the centre set up at the Department of Disaster Prevention and Mitigation.

Eight passengers were killed in Feb. 2012, five others injured when their passenger van slammed into the back of a parked 18-wheel truck .

The centre will also serve as headquarters to link all commands at all level, to solve immediate problems occurring from road accidents and to adjust traffic plan to response the needs arising.

Gen Chat said the centre will promote road safety and monitor the number of traffic accidents during the so-called “Seven Dangerous Days” from December 27, 2012 until January 2, 2013.

The government has a target to reduce the number of road casualties during this period by at least five per cent from the same period of last year, he said.

As usual, emphasis will be given to controlling speed, cracking down on driving while intoxicated, wearing helmets for motorcyclists and controlling pickup trucks carrying passengers.

The deputy minister said that checkpoints will be in place, especially at minor roads, to monitor risky behaviour.

Department of Disaster Prevention and Mitigation Director General Chatchai Promlert said that daily press briefings on the death toll and casualty counts will take place between December 28th to January 3rd at 10am to inform motorists to be more careful when travelling and to strictly observe traffic rules. (MCOT online news)

It concluded that often tourists faced a higher risk of dying in a road accident than residents of the country they were visiting.However, the Thailand Road Safety Centre got it wrong when it said the FIA had ranked  Thailand second only to Honduras for fatal road accidents involving tourists.

It was in fact research by the US Department of State specifically on road accidents involving US citizens that came to that conclusion.Called “Bad Trip” the foundation report  quoted a  US Department of State Database on fatal accidents reported in 14 countries over a period  20o2 to 2007. The average statistics showed that only Honduras reported more fatal road accidents involving US tourists than Thailand.  The US statistics showed the average road kill rate for US tourists in Thailand in 2005 was 50 for 100,000 visits.

The quoted figure was higher than the average road kill rate for Thai citizens, which was 19 for 100,000, indicating the risk of a deadly accident was higher for US tourists than Thai residents.While experts might challenge the methodology and conclusions of the quoted data in the FIA  report, Thailand’s travel industry understands that references to a high travel risk on Thai roads could seriously mar  the country’s claim to be a safe and hospitable destination.