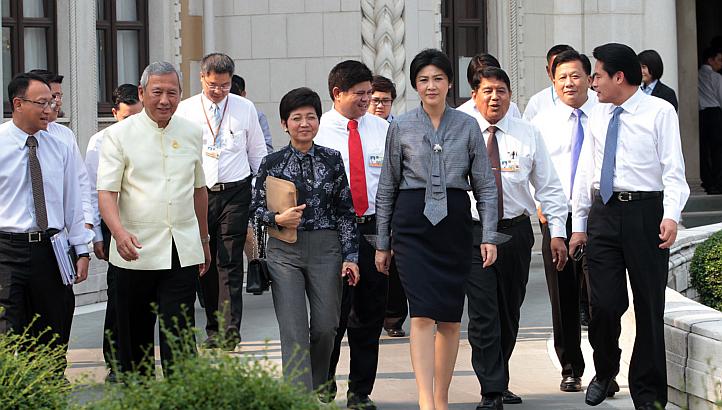 Thais are well known to believe that sweating (at least in an office or a mass transportation) is the very first step to a deadly disease : thus they like to have their hair combed buy a steady and vigorous flow of cool air, preferably set in the 21 to 23 degrees range with fan at full speed.

No matter what is the temperature outside, rain or shine, the aircon in my office is always set so that everybody has to wear a sweater or a jacket. Sadly  having a word with various office manager about raising the temperature or lowering the fan, not to mention saving energy, is a complete waste of time : they just smile and don’t care.

Well folks this is about to change as the Government is stepping up two major campaigns, one for energy saving and the other for road safety during the Songkran festival, the traditional Thai New Year. Yes along with polar temperatures, Thai people do care for a couple of drinks while driving.

At a meeting of permanent secretaries of all ministries on 21 March 2013, Prime Minister Yingluck Shinawatra thanked various ministries for their cooperation in cutting energy use by 15 percent. She urged the agencies working with the private sector to ask private companies to join the energy-saving campaign, as well.

The campaign is heightened following the scheduled disruption in natural gas supply from Myanmar from 5 to 14 April 2013. It is needed to cope with the peak electricity consumption period in Thailand. The Prime Minister has assigned the Ministry of Energy to work with the Ministry of Interior, which supervises the Metropolitan Electricity Authority and the Provincial Electricity Authority, in reducing energy consumption among the people.

The Ministry of Culture was assigned to come up with suitable designs for both casual attire and semi-casual attire. It will also organize an exhibition on Thai fabric at the mobile Cabinet meeting in Chachoengsao. The use of Thai fabric is part of the Government’s energy-saving campaign, since Thai fabric is suitable for climate in Thailand. It will also help preserve Thai culture and distribute wealth to local communities, which are producing areas for Thai fabric.

Emphasis is placed on speed limit and controls on drunk-driving, alcohol consumption, and the use of motorcycles. Road accidents kill a large number of people in Thailand each year. Thailand has set the period from 2011 to 2020 as the “Decade for Road Safety” in order to reduce road accidents. Read More Here : Inside Thailand — Stepping Up Campaigns for Energy Saving and Road Safety during Songkran Festival