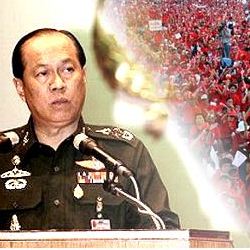 The government is obligated to keep peace and the security forces have been instructed to ready measures to control the situation amid the anticipated red-shirt protests, Deputy Prime Minister Suthep Thuagsuban said yesterday.

“Protests must not disrupt the people’s daily life nor damage commerce and the economy,” he said.

Suthep voiced concern that last week’s meeting between former premier Thaksin Shinawatra and his red-shirt supporters might point to the mushrooming of street protests in the capital and upcountry.

Every provincial governor and all provincial offices of the Internal Security Operations Command have been authorised to carry out crowd-control measures to safeguard government installations, the infrastructure for basic services and the transportation system, he said.

The civilian, police and military units will work in an integrated manner for peace-keeping. In the capital, soldiers have been instructed to help police deal with protesters, he said.

He urged members of the public to alert the authorities about any suspicious activities which could lead to violence.

The authorities are closely keeping a tab on the red shirts to determine whether they would escalate their protests into an armed struggle, he said.

Commenting on Thaksin’s demand for negotiations to thwart the possibility of violence, the deputy prime minister said preconditions, such as the return of Bt76 billion in frozen assets, expunging his conviction and revoking his two-year jail term made it impossible for talks to take place

Electronics and electrical components account for nearly 35% of total exports.
While official unemployment figures were still low at 1.5% as of December, they are expected to climb potentially twice as high in the months ahead as cash-strapped employers opt to save costs by cutting staff rather than reducing worker hours. Whether rising unemployment will translate into significant new rounds of social unrest and political disruption is unclear.

Most serious drought expected in next five years forecast