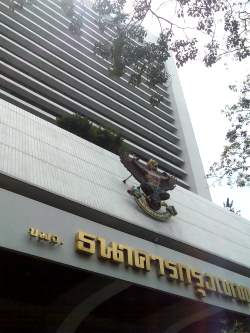 A hand grenade exploded at the Bangkok Bank’s Silom branch on Saturday night while another grenade was found at the bank’s Rama II branch.


Political unrest and the shutdown of the two airports in Bangkok in late November severely affected tourism and consumer confidence in Thailand. Real GDP is projected to contract by 2.7 percent in 2009, as the global outlook remains negative and external demand continues to contract. The fiscal stimulus and monetary expansion implemented by the authorities are likely to partially mitigate the impact of the slowdown, allowing growth to resume in the fourth quarter of 2009 assuming a better outlook for the global economy in 2010.

In 2008, public investment contracted by nearly 5 percent as a result of political uncertainties, which delayed investment decisions. Public investment is projected to grow at 7 percent in 2009 as the implementation of large infrastructure projects step up.

“Countries like Thailand that have been dependent on manufacturing exports are most affected,” said Verghis, who covers Thailand and four other Southeast Asian countries. The World Bank released its latest forecasts for Thailand and other economies in East Asia and Pacific on Tuesday.

The global economic slump shut down what has been, for the past three decades, the main engine for Thailand’s economic growth: exports. As a result, the manufacturing sector has been badly hit. The Thai government estimated that one million or more workers would lose their jobs this year due to the slowdown. In January, the unemployment rate stood at 2.4 percent of the total workforce – a full percentage point higher than the 1.4 percent recorded in December 2008.

However, the World Bank cautioned that, for public debt to remain manageable, budget deficits will need to be reduced over the next few years and growth needs to return its long-term average, highlighting the importance of using the crisis as an opportunity to enhance growth prospects.

On the demand side, private consumption and investment declined notably in the last quarter, despite falling inflation during the second half of the year in line with lower oil prices. Both export and import expanded satisfactorily during the first three quarters. However, during the last quarter, export contracted following trading partners’ economic slowdown while import decelerated markedly in line with export and domestic demand conditions.

Related Topics:bangkok bank
Up Next

The e-commerce giant’s executive chairman, Jack Ma, was in Thailand this week and has become the first big name to join Thailand’s plan to upgrade its economy known as Thailand 4.0. END_OF_DOCUMENT_TOKEN_TO_BE_REPLACED
Loading...
Continue Reading