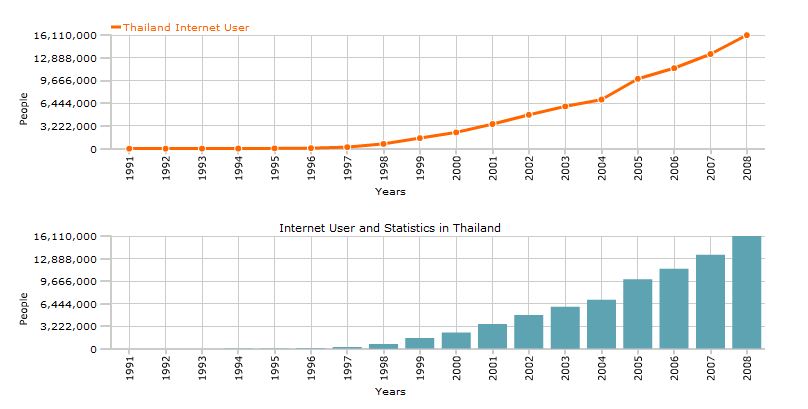 While still relatively young, Thailand’s information and communications technology industry is growing with great promise. Businesses, government agencies and households are going digital, and more Thai consumers have become tech-savvy, with the latest ICT gadgets fying off the shelves of local stores.

Broadband Internet is readily available in major cities and towns, but is still to be sought after in smaller villages and in the countryside. As the statistics have shown, the majority of internet users in Thailand still rely on dial-up access. TOT operates a nationwide local rate number, 1222, allowing dialing to most Internet service providers. Dial-up prepaid internet packs can be readily bought in convenience stores and other places. Subscribers of fixed telephone lines by True Corporation have access to dial up internet by dialing a certain number and then being billed on their normal telephone bill.

Figures from various industry sources show that ICT in Thailand is certainly on the go. There are now in excess of 16 million Internet users in the country. A total of six international Internet gateway service providers and national Internet exchanges operate in Thailand. The mobile phone sector currently boasts a penetration rate of more than 50 subscribers per 1,000 inhabitants. Computer usage has expanded to nearly 30 people in every 1,000. “Smart Thailand,” “information literacy,” “sustainability” and “digital ethics” are current buzzwords as the Thai ICT industry becomes bigger.

The main factors fueling growth are government stimulus programs, banking and insurance companies spending more to upgrade operations, and computerization of practices in the education and health care sectors.

ICT applications are springing up constantly as Thai society embraces the digital age. Online shopping appears more enticing to citizens, with the number and value of e-purchases increasing. Business process outsourcing or BPO is seen as yet another online service with explosive potential. Further, the SOHO or small office and home offce concept is taking hold. Under a related development , the Off ice of Smal l and Medium Sized Enterprises Promotion (OSMEP), a semi-governmental agency, is encouraging fresh college graduates to become “homepreneurs.”

Note: Per Capita GDP in US dollars, source: United Nations Department of Economic and Social Affairs.

Internet communication has made it possible for business-minded individuals to develop home-based companies by using their PCs to produce and sell art graphics and other digital content. Young entrepreneurs at home are seen as a potentially important part of the country’s economy. Social networks such as Twitter and Facebook are perhaps the most popular online people-connectors right now. As demand for such networking sites intensifies, this in turn boosts the need for hard disk drives (HDDs) and other data- storage products. Such developments are adding to Thailand’s stature as the world’s largest manufacturer of HDDs, as the country produces up to 400 million units annually or nearly half of global supply.

The country’s output of computer products in general , and HDDs in par t icular, will only increase. A recent injection has come from U.S.-based Hutchinson Technology Inc., which plans to invest 4.3 billion baht to establish a hard disk parts factory in Thailand. Construction on Hutchinson’s first plant outside the United States will start in August, with production commencing in 2011. Thailand is also one of Southeast Asia’s largest assembly centers for integrated circuits (ICs) and semiconductors. Exports of ICs totaled 13.7 billion pieces in 2008, a leap from 5.7 billion six years earlier.

The country each year also imports several billion dollars worth of ICs to feed its technology hunger. Computer products such as keyboards and monitors are likewise significant trade-revenue earners. Web development is progressing as well. One related initiative is a three-year WebsiteSpark program that pools the guidance and resources of the Science and Industry ministries, OSMEP, Software Park Thailand, and Microsoft (Thailand).

The project intends to help Thai professional Web developers generate more business through measures such as free downloads of Microsoft solutions and training from the software park. In line with the local industry’s current SME emphasis, WebsiteSpark caters to companies with 10 or fewer employees. Growth Nearly All Around Total value in Thailand’s ICT industry is expected to reach 595 billion baht in 2010, up 7% from last year, according to statistics from the National Electronics and Computer Technology Center (NECTEC) .

Computer sector performance in particular is seen as building this year on solid post-crisis growth achieved in 2009, when hardware sales shot up 31% y-o-y, data communication equipment climbed 28.1%, software rose 27%, and computer services revenue increased 12%. Some sectors, especially telecoms, are still experiencing negative growth, but at a reduced rate compared with during the 2008 global economic crisis. Many other sectors, meanwhile, are booming.

Data services revenue is forecast to rise 20.1% as mobile e-mail and Internet browsing expand. Thais are able to gain access faster with the local infrastructure’s adoption of standards such as GSM, GPRS and CDMA. Many of the world’s top ICT companies, including IBM and Hewlett-Packard, operate in the country. Hewlett-Packard (Thailand), which anticipates 15% sales growth this year for its own laser printers, said the country’s overall market for the product will expand to 342,000 units in 2010. But unlike in the late 1980s, Thailand’s technology industry is no longer dominated by only a few large companies. It is now a lively playing feld of rising creativity and new gadgets, systems, services and capabilities.

The country has come a long way from its first Internet connection in the early 1990s at a university research center. Wages are also becoming more attractive, bringing talent into the industry. A data center manager with 10 years of experience can earn 150,000 baht per month, and chief technology offcers are taking home more than 300,000 baht monthly. Support Public and Private The ICT industry in Thailand receives vibrant support from all sides. As a framework for nurturing development of the industry, the Thai government has laid out a master plan with key goals. These include ICT development nationwide, expanded technological training and enhanced R&D. Another goal is to harmonize ICT growth with the overall economy to improve the quality of life for Thais.

Many organizations are active in promotion. Among the government bodies are the Ministry of Information and Communication Technology (MICT), Software Industry Promotion Agency (SIPA), National IT Committee (NITC), and Software Park Thailand. Private- sector key players include the Association of Thai ICT Industry, Association of Thai Software Industry (ATSI), Thai Software Export Promotion Association, and Thai Animation and Computer Graphics Association. Established in 1997, Software Park Thailand is one standout. The park is mandated to help strengthen the country’s software industry. It offers training and certifcation on software quality and standards, and assists start-up companies in obtaining incubation space. Legislation is also playing a role in shaping a stable ICT infrastructure. Perhaps the first key enabler was the Electronic Transactions Act of 2001, which established a legal framework for e-commerce in the country. There have been at least fve other important technology laws since then. Industry support largely means financial assistance to sustain development. According to International Data (Thailand), local ICT spending will climb 6.82% in 2010.

The latest available statistics show that Thailand’s spending in 2008 was 75.72 billion baht for computer hardware, 62.94 billion baht for computer software and 24.98 billion baht for computer services. The government’s Thai Khem Kaeng or Strengthening Thai land program to stimulate the overal l economy includes funds for computer and software procurement. Purchases aim to support changes to new technologies such as high-speed Internet, e-documentation, Windows 7 and 3G. MICT’s ICT Industry Promotion Bureau plans to spend more than 3.6 billion baht in 2010 to spur progress by organizations and projects under its purview. This includes setting up the Government Information Network or GIN, which will centralize communication by state agencies, and pushing the country’s ICT Learning Center and Smart- Card Project.

3G service to be launched in Thailand early 2011