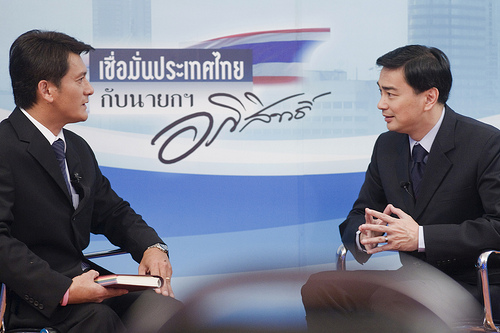 Prime Minister Abhisit Vejjajiva has reiterated his call on Thai people to work together on the reconciliation process.

The Prime Minister on 23 May 2010 spoke in his weekly television program, recapturing the events over the past week and talking about what his Government intends to do in helping the country overcome the traumatic experience.

He first noted that security officers had returned the Ratchaprasong area to the Bangkok Metropolitan Administration (BMA), which had invited people of Bangkok to join in clearing and rehabilitating the area. On Monday, 24 May, government offices and business would resume as normal, and schools open. The Prime Minister also would return to work at Government House, while the Center for the Resolution of the Emergency Situation (CRES) would also move to a location nearby.

Reviewing the situation over the past week, Prime Minister Abhisit recalled that some 10 days ago, after he had proposed a reconciliation plan along with an early election date of 14 November 2010 should the situation improve, and invited all sides to join the reconciliation process, the protest leaders took more than a week to express their agreement in principle, but then they refused to end their rallies and join the reconciliation process. The Government therefore had to take steps to restore normalcy as the protesters’ prolonged occupation of the Ratchaprasong area had impacted tremendously the public as well as the economy. And it intended to achieve this by putting an end to the protests with as little losses as possible. However, had the officers moved in to disperse the rallies, it could have led to much loss, as experience from 10 April 2010 had shown that there were armed elements among the protesters with a large number of weapons and other materials for use in acts of sabotage.

The Prime Minister said that the authorities had been able to put the situation under control and returned the area concerned to the BMA. A large amount of weapons were found, including M79 grenades, incendiary bombs and different types of bullets, as well as vehicles rigged as car bombs.

With this in mind, Prime Minister Abhisit said that the Government decided instead to cordon off the protest area so as to prevent attempts to bring in more people into the protest area, and to put pressure on the protesters to leave. In this regard, security officers had set up check points in four directions around the Ratchaprasong area, while maintaining a certain distance away, outside the shooting range of M79 grenades. While the officers conducted these operations, some protesters including armed elements attempted to attack the check points, be they at the Din Daeng and Ratchaprarop or Bon Kai and Rama IV area. Some 46 people lost their lives during this period. These losses, which included journalists and innocent people, the Prime Minister stressed, were unrelated to the protest area at Ratchaprasong but resulted from clashes with those who attacked the check points. The officers had to respond to protect the check points and defend themselves in accordance with the clearly stipulated rules of engagement. During that period, more than 100 M 79 grenades were fired at the check points but losses among the officers were minimized as they were positioned outside the M79 effective firing range.

This notwithstanding, the armed groups continued to attack innocent people and other groups such as foreign journalists, and emergency medical and health volunteers, to inflict losses as a way to pressure the Government. As images revealed, they also put a child on their bunkers made of tires as if to tell the officers that had any clashes occurred, the casualties would include children.

Such acts of terrorism and sabotage, Prime Minister Abhisit noted, were carried out continuously, until on 17 May 2010 when some groups had attempted to mediate, including by seeking to designate Pathumwanaram Temple compound as a safe area. In this connection, the CRES’ position was clear: the best solution was for the protesters to join the reconciliation process and end their rallies; otherwise, more losses would occur, and it would not be possible to allow the protesters to occupy the Ratchaprasong area indefinitely. Meanwhile, there were some groups of people who had indicated their readiness to take the matter into their own hands. Hence, the Government’s stance conveyed through the mediators during 17-18 May was to ask the protesters to end their rallies and join the reconciliation process along the lines of the proposed five-point reconciliation plan. But the protesters came back by calling for a ceasefire. To response, the Government explained that what the security officers had done was the setting up check points, and that they would use weapons only to protect themselves and others as well as to retaliate against those clearly identified as armed with weapons or intending to inflict harm, such as by shooting at the leg of the person who attempted to light up a gas truck.

Many businesses across Thailand will come to a halt while others will make necessary adjustments to pay their last respects to the beloved late King Bhumibol Adulyadej. END_OF_DOCUMENT_TOKEN_TO_BE_REPLACED
Loading...
Continue Reading