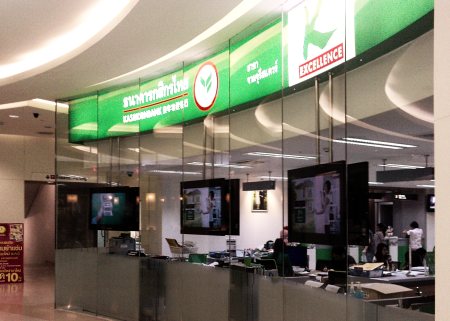 Bankers have called for the government to gradually liberalise the financial sector in order to ensure their competitiveness under the planned Thailand-European Union Free Trade Agreement (FTA).


To develop Thailand as a regional financial center, the BOT has allowed qualified financial institutions operating the International Banking Facilities in Bangkok (BIBFs) since 1993 and in other provinces (PIBFs) since 1994. A licence for international banking facilities permits domestic commercial banks and foreign bank branches to provide the following activities: acceptance of deposits in foreign currencies, lending in foreign currencies to both residents (out-in lending) and non- residents (out-out lending), and foreign exchange transactions.

Foreign financial institutions, particularly commercial banks, should be allowed to play more important role in the Thai financial sector. During the past three decades, the Thai monetary authorities were reluctant to encourage foreign participation in the market.

Since the financial liberalization, Thai commercial banks can engage in all kinds of banking activities. Recently, the scope of banking activities covers not only traditional banking activities but also providing information and financial consulting services as well as feasibility studies; operating as selling agent for debt instruments issued by the government or state enterprises as well as undertaking mutual fund management; arranging, underwriting and dealing in debt securities; operating as securities registrar and representative of secured debenture holder. Each commercial bank must receive permission from the BOT before undertaking these activities.

Commercial banking is changing rapidly in Thailand. Banks are providing a greater array of services. They accept time savings, and demand deposits and they lend money through overdrafts, loans, bill discounts, and leasing. Activities also include fee-based services such as feasibility studies, loan syndication, consulting for mergers and acquisitions, and custodian services. In addition, banks may underwrite, issue, and trade debt instruments and issue negotiable certificates of deposit (time deposits with variable maturity).

Thai banks are small compared to their European, American, and Japanese counterparts, although some are prominent by regional standards. Thailand’s leading bank, for instance, is also one of the top commercial banks in Southeast Asia.

A few of these prominent banks dominate the local market. In June 1993, the top three local banks controlled over half of the domestic market. Together, they accounted for about 54 percent of the deposits, tendings, and assets of domestic banks. They also operated large networks of branches in excess of 400 each.

Most Thai banks, regardless of size, are profitable. In 1992, the average Thai commercial bank earned US$50 million in net profits. The bulk of the revenues came from the spread between lending and borrowing rates. Because of protection, these spreads remained high, at times nearing five percentage points.

This is, however, changing. Recent reforms have increased competition between Thai commercial banks and other local and foreign financial institutions. Local banks must now rely less on interest income and more on fee-based services.

In general, Thai banks have suffered management problems in recent years and are having difficulty in complying with capital-adequacy and other requirements set by the Bank for International Settlements (BIS). The baht currency crisis dealt a severe blow to the banking industry and has prompted a major restructuring of the banking industry. By mid-2000, nonperforming loans accounted for about a third of total lending, down from a peak of almost 48% mid-1999. Thai banks are being forced to accept big write-offs by selling non-performing loans for as little as 30% of the loan’s face value.

The Thai domestic banking system has been criticized for failing to mobilize adequate domestic savings and for not offering adequate incentives to savers. The International Monetary Fund reports that in 2001, currency and demand deposits—an aggregate commonly known as M1—were equal to $14.4 billion. In that same year, M2—an aggregate equal to M1 plus savings deposits, small time deposits, and money market mutual funds— was $119.3 billion. The money market rate, the rate at which financial institutions lend to one another in the short term, was 2%. The discount rate, the interest rate at which the central bank lends to financial institutions in the short term, was 3.75%.

Foreign financial institutions, particularly commercial banks, should be allowed to play more important role in the Thai financial sector. During the past three decades, the Thai monetary authorities were reluctant to encourage foreign participation in the market. There had been an implicit policy of the Bank of Thailand that protected Thai banks over foreign counterparts which had led to incompetence of Thai banks before the 1997 Financial Crisis. “Foreign penetration has had positive effects on Thailand on the sense that they promoted market competition and improved the operational efficiency of banking. In addition, foreign acquisition of Thai domestic banks introduced advanced skills and technology helping upgrade the business operations of banks (Okuda and Rungsomboon, 2006)”. Fortunately, one of the objectives of the Financial Sector Master Plan (FSMP) Phase II is to increase competition within the financial sector through offering greater foreign participation. It remains to be seen whether this will be materialized.

Many businesses across Thailand will come to a halt while others will make necessary adjustments to pay their last respects to the beloved late King Bhumibol Adulyadej. END_OF_DOCUMENT_TOKEN_TO_BE_REPLACED
Loading...
Continue Reading