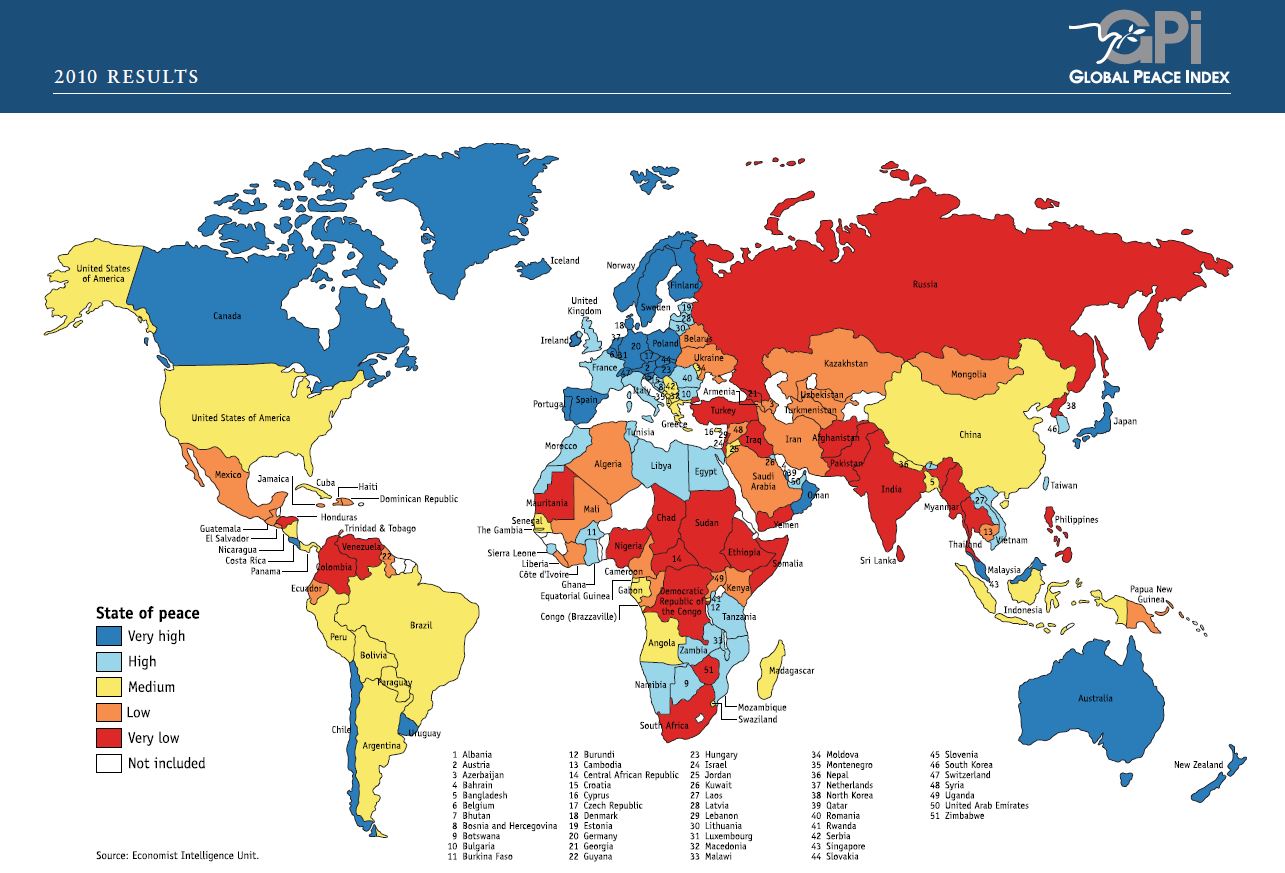 Thailand is ranked at 124 out of 149 countries in the Global Peace Index GPI conducted by the Institute for Economics and Peace published on 8 June 2010, while New Zealand is ranked top for two consecutive years.

Thailand was ranked at 118 in 2009. Within the ASEAN region, the Kingdom is less peaceful than Malaysia, Singapore, Laos, Vietnam, Indonesia and Cambodia but more peaceful than the Philippines and Myanmar. Based on the list, Iceland has been ranked second most peaceful country followed by Japan, Austria, Norway, Ireland, Denmark, Luxemburg, Finland and Sweden, respectively, while the least peaceful country is Iraq followed by Somalia, Afghanistan, Sudan and Pakistan.

The Asia Pacific region is on average the fourth most peaceful region, but it exhibits wide variation. The region’s OECD nations rank highly, with New Zealand coming first overall and Japan third, a two pronged impact of very strong scores for overall domestic peace and low levels of militarisation. Laos and Malaysia experienced improvements in their GPI scores from last year, with greater levels of respect for human rights and increased political stability contributing factors in both countries.

As last year, there is a marked divide in south-east Asia, with Taiwan, Vietnam and Indonesia all in the top 70, while Cambodia, Thailand and the Philippines are all ranked below 110th. Scores in all three countries deteriorated last year, with growing political instability a common theme.

Malaysia rose four places to 22nd position, supplanting Singapore as the highest ranked south-east Asian nation. As last year, there is a marked divide in south-east Asia, with Taiwan, Vietnam and Indonesia all in the top 70, while Cambodia, Thailand and the Philippines are all ranked below 110th. Scores in all three countries deteriorated last year, with growing political instability a common theme. The Philippines’ tally rose sharply, amid a worsening security situation in several parts of the archipelago, notably a violent conflict between the Islamist Abu Sayyaf Group (ASG) and the government on the island of Jolo in the Sulu archipelago.

South Asian nations occupy the lower half of the regional table, headed by Nepal, in 82nd place. Ongoing internal confl icts and related security concerns in Afghanistan and Pakistan contribute to their low rankings – Pakistan’s overall score deteriorated steadily for the second successive year and it slid three places into the bottom five. The lowly positions of North Korea and Myanmar refl ect high scores in the broad categories of confl ict and security and very high levels of militarisation.

New Zealand is ranked as the country most at peace for the second consecutive year, followed by Iceland and Japan. Small, stable and democratic countries are consistently ranked highest; 15 of the top 20 countries are western or central European countries. This is an increase from 14 last year, and refl ects an improvement in Hungary’s score. Qatar and Australia remained in the top 20 – in 15th and 19th places respectively. All fi ve Scandinavian counties are in the top ten of the GPI, although with the exception of Iceland, each experienced slight deteriorations in their scores and ranks. Island nations generally fare well, with the notable exception of Sri Lanka. For the fourth year running, the country ranked least at peace is Iraq.

Afghanistan, Somalia and Sudan follow; countries that are in a state of ongoing confl ict and upheaval. The average score for the countries surveyed in the 2010 GPI is 2.02 (based on a 1-5 scale), a slight rise (less at peace) compared with last year, when the average stood at 1.964. There is little variance (0.307) between the overall scores of the top 20 countries (from 1.188 for New Zealand to 1.495 for Hungary), unchanged from last year. The 20 lowestranked countries exhibit a far greater spread of 0.832 (from 2.574 for the Philippines to 3.406 for Iraq), a slight fall (improvement) from 0.856 last year.

Thailand wants to get Thaicom satellite back from Singapore’s Temasek