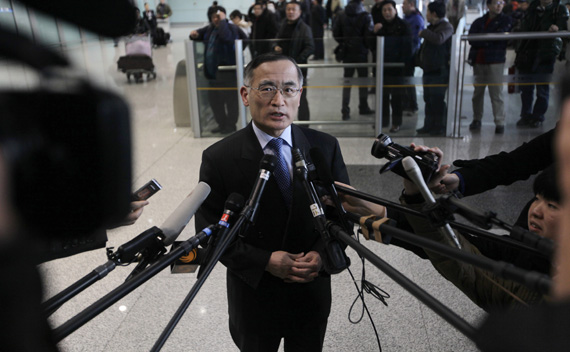 If this is the case, a critical question becomes whether Korea’s neighbors have enough patience, “strategic” or otherwise, to wait for two more years before revisiting an agenda that includes not only a stalled denuclearization process where there is no prospect of resuming Six Party Talks to address denuclearization, but also three practical concerns in North Korea: 1) humanitarian aid, 2) missile development, and 3) conventional provocations, especially around the Northern Limit Line (NLL).

In some respects, the most attractive feature of patience with the current status quo from a North Korean perspective is that every day that there are no talks on denuclearization means one more day in which the world has tacitly accepted North Korea as a de facto nuclear weapons state. The above three issues are areas where it is possible to imagine that new crises might overwhelm the current focus on denuclearization, necessitating new diplomatic efforts while ensuring that the objective of denuclearization is not lost in the shuffle.

In the case of humanitarian aid, the objective must be to avoid linking food aid to political objectives or to a political agenda with North Korea, as was the case in the late 1990s. One way of doing this is to lay down clear criteria for aid provision that to a certain extent are independent of North Korean demands. Ambassador Robert King has essentially laid the groundwork for such an approach during his visit to Seoul last week when he spelled out three criteria for delivery of U.S. food aid to the North: 1) demonstrated need on the basis of in-country surveys, 2) a comparative evaluation of North Korea’s needs in the context of global need, 3) a secure guarantee of monitoring of aid. South Korea has linked provision of food assistance to improvements in inter-Korean relations, so it is necessary for United States and South Korea to further coordinate approaches on food aid to North Korea.

The missile question is more difficult, but a case can be made for approaching it outside the context of the Six Party Talks, whose September 2005 Joint Statement does not address the issue of missiles. The development of a missile-delivery system for nuclear capabilities expands the envelope of the North Korean threat and may justify consideration of channels outside of Six Party Talks. The CFR’s Independent Task Force on Policy Toward the Korean Peninsula concluded last summer that the United States might consider opening a bilateral dialogue with North Korea to discuss reinstatement of a North Korean moratorium on missile testing and development. This may be even more important now that the DPRK has completed a new, more sophisticated missile launch pad.

Finally, consideration should be given to addressing the issue of conventional provocations, including ongoing provocations around the South Korean-drawn NLL, through the existing armistice mechanism. One possibility that should be thoroughly reviewed by the governments concerned is to utilize the armistice as a vehicle by which to reopen negotiations on maritime conflicts, since the 1953 armistice did not envision a need to manage the maritime aspects of the current North-South demarcation. Establishment of such a mechanism would provide a potential means of dealing with issues that would not conflict with the longstanding demand for North Korea to return to the path of denuclearization through the Six Party Talks.

In the absence of stabilized inter-Korean relations, these three issue-areas will require careful coordination with the South Korean government to determine a course of action that successfully addresses these issues while not undermining prospects for resumed inter-Korean negotiations. In light of the current impasse in inter-Korean relations and diminishing prospects for negotiated denuclearization, one might also argue that considerably greater effort should be placed on enhancing joint coordination mechanisms and contingency planning to manage the next North Korean crisis.

Although there are signs of flexibility in both South and North Korea that suggest the possibility of renewed efforts to establish some form of regular contact in inter-Korean relations, the underlying attitude on both sides is that they would prefer to be dealing with a different counterpart. The Lee Myung-Bak administration would prefer to deal with a reformist, open-minded North Korean leadership, but the Kim Jong Il regime remains illiberal and anachronistic, while now attempting to influence the South Korean public in ways that might lead to a shift toward a more moderate North Korea policy under Lee Myung-Bak’s successor. Progress toward stabilizing the relationship is likely to be hard-won.