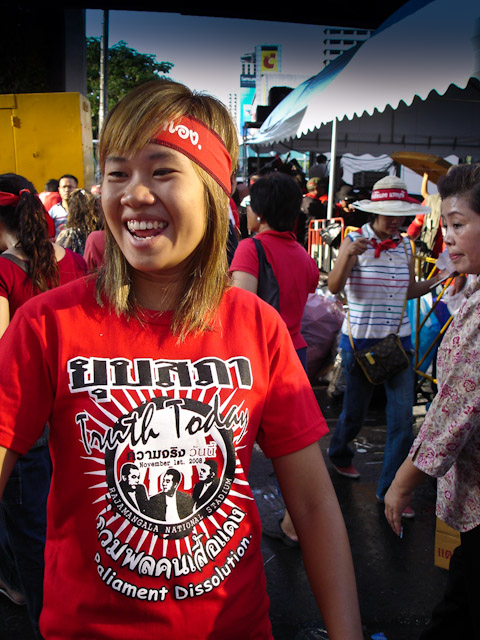 Thai Prime Minister Abhisit Vejjajiva has given his word: the nation, submerged in growing political uncertainty, will go to the polls in the first half of this year. The election is likely to be held in June. On 5 March, Abhisit’s Democrat Party released a policy statement promising to increase the minimum wage by 25 per cent over the next two years, provide education loans for 250,000 university students, issue more community land titles and establish a 2,500-strong taskforce to help suppress drug usage and trafficking.

It seems Abhisit is determined to ‘buy’ his way back into power. For critics, such policies evoke memories of former Prime Minister Thaksin Shinawatra and his populist ideas. Ironic, it would seem, considering the Democrat Party’s previously strong reproach of Thaksin’s people-centric policies.

Over to the opposition Puea Thai Party, where executive members are claiming that the party now has more ‘ammunition,’ or election funds, of 5 billion baht (Yes this is correct – 5 Billion baht) (US$164 million), at its disposal

‘We want the country to move ahead and the people to have a better quality of life,’

Abhisit recently proclaimed. But, as one Red Shirt member of the United Front for Democracy against Dictatorship (UDD) argued, that better quality of life existed under Thaksin’s regime — it was Thaksin’s opponents who took it away. Such sentiments are strong in the north and northeast regions of Thailand, Thaksin’s stronghold, where the Democrat Party remains hugely unpopular.

Over to the opposition Puea Thai Party, where executive members are claiming that the party now has more ‘ammunition,’ or election funds, of 5 billion baht (Yes this is correct – 5 Billion baht) (US$164 million), at its disposal. This is compared to the 4 billion baht of the previous election, and is money they claim will enable them to win the election ‘hands down.’

Thaksin is believed to be the largest financial supporter of the Puea Thai Party. And although in recent months he has kept a low public profile, he is reportedly busy laying out election strategies. Late last year, a group of Puea Thai members travelled to Beijing to meet with Thaksin, apparently to receive instructions on how to carry out the election campaign.

In reality, the opposition Puea Thai Party still has many hurdles to overcome.

Their lack of leadership, and close association with the red-shirted UDD, implicated in the political violence of April and May last year, are both problematic. Disagreements among top leaders over how to reposition the party in the future are also increasingly intense, potentially jeopardising the party’s chances of triumph at the next election.

Of course Abhisit, too, has many obstacles ahead of the election season.

First, his government, although comfortably beating off the opposition’s censure debate from 15–17 March, may have to deal with the rise of political violence among rival parties in the period leading up to the election. Earlier, the opposition proposed a three-day censure debate to grill Abhisit and nine cabinet members.

Six of them are from the ruling Democrat Party, while the rest are from the coalition Bhumjaithai Party. The Puea Thai wanted to use the no-confidence motion to attack the government on its use of military forces to disperse the anti-government Red Shirt protesters of last year, in which 91 people were killed, and on other bread-and-butter issues, such as the high prices of essential goods, and corruption.

Second, Abhisit will also have to manage the Yellow Shirt People’s Alliance for Democracy (PAD) and its demand on his government to get tough on the Preah Vihear Temple issue. The PAD has proven to be a potential threat for Abhisit, especially by stirring up a sense of nationalism against Cambodia in an oblique effort to illegitimise the Abhisit regime.

Last week, Major General Chamlong Srimuang, a core PAD leader, reproached Abhisit’s plan for an early election. For Chamlong, Thai politicians have been unable to solve existing problems of vote-buying and corruption, and an election would only perpetuate such illegal practices. Chamlong suggests ‘a temporary politics,’ which could mean the postponement of an election until a new political structure is put in place.

Chamlong is right, but only partly. An election is not the answer to Thailand’s current crisis. The problem here is not about vote-buying or corruption. It has to do with those in power and their continued avoidance of the most important issues — political grievances, double standards, the unequal share of political power and the uneven distribution of national wealth. Thailand’s many poor are still missing out.

Pavin Chachavalpongpun is a fellow at Singapore’s Institute of Southeast Asian Studies.

See the rest here:
An election will not fix Thailand’s woes