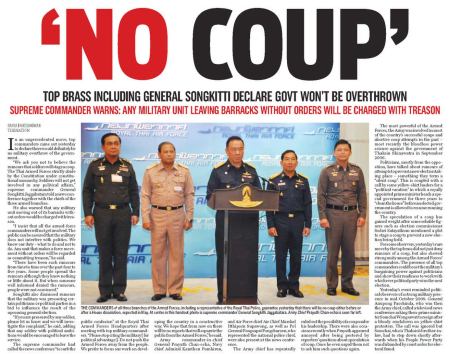 To try and ensure the outcome they want, military officers have been twisting the arms of small parties behind the scenes to join the Democrat Party in a post-election coalition, if necessary. Still, if that does not work, the army could exercise other options.

when The Nation newspaper, a reliably pliant mouthpiece for the ruling establishment, has a giant front-page headline proclaiming “NO COUP”, then alarm bells start to ring:

As Marshall notes, other factors are at work too. The Thai military, like some other Thai elites, views Thailand as a kind of special country, a place where trends in world affairs and international politics somehow do not apply, and which outsiders cannot understand. So, Marshall notes, despite the fact that the post-coup government in 2006 and 2007 was a shambles, incapable of managing Thailand’s sophisticated economy, and the fact that, in the Middle East today, autocrats are showing that they cannot simply call out the troops, murder their people, and expect the international community to stand by, Thailand’s military believes that, if necessary, it could stage a coup, crack down on dissent, and get away with it. Maybe. But Ali Saleh and Muammar Qadaffi might tell them that it’s not so easy anymore.