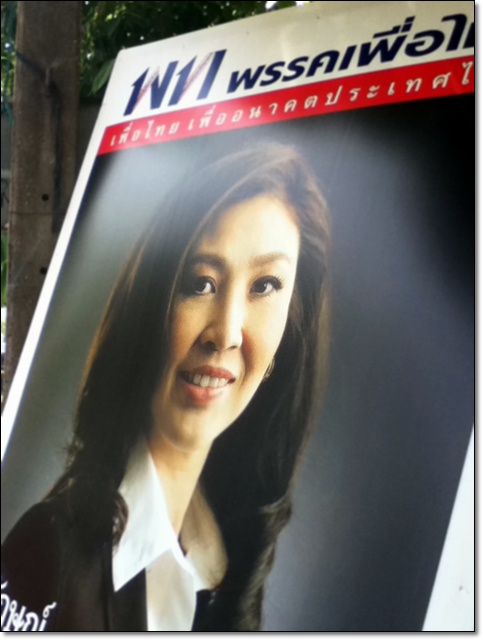 Prime Minister Abhisit Vejjajiva of the ruling Democrat Party and Yingluck Shinawatra, of the Pheu Thai Party will battle for Thailand’s top political post in the July 3, 2011, General Election. But several analysts have made comments stating that both leaders will probably act as “proxies”,  are even “clones” because they are backed by the powerful interests that have divided the country.

The Pheu Thai Party is certain to win more than half the seats in the House of Representatives and form the next government, Yingluck Shinawatra said. Yingluck’s Pheu Thai party has pledged that if it wins the election, it will issue an amnesty for all charged in relation to the 2006 coup, which could pave the way for Thaksin to return to Thailand. This would be the worst case scenario for the ruling party of Abhisit and the military who stated the coup against Thaksin in 2006.

There is an ongoing debate as to whether Yingluck would just be an inferior clone of her more famous brother. Harrison George, writing for Prachatai, discusses this issue:

He obviously plans to use Yingluck as some sort of robot that he can manipulate from a distance and so act in effect as Prime Minister without being elected.

But thinks that Thaksin’s admission about his sister being his ‘clone’ could have been misinterpreted:

Now this could mean nothing more than the fact that Thaksin’s understanding of genetics is about as flaky as his grasp of English grammar. But it also allows the interpretation that Yingluck is not some sort of remote control puppet, but merely an able learner of the Thaksin model of public administration

Whatever the case, the ‘clone’ issue has generated a lot of discussion in political circles:

Political speculators are also having a field day, suggesting possible clones among the political classes, noting that plastic surgery could be used to reduce any resemblance of a clone to the original model.

Ms Yingluck, the No 1 candidate on the Pheu Thai party list, exuded confidence after leading 33 party candidates to register to contest all 33 constituencies in Bangkok at the Thailand-Japan Youth Centre at Din Daeng.

The youngest sister of former prime minister Thaksin Shinawatra said she believed Pheu Thai will win  more than  half the 500 seats in the House, judging from the popular support she saw while visiting areas in the North, her home region.

Ms Yingluck, however, was not sure if Pheu Thai would form a one-party government or try to put together a coalition.

Can Thailand’s next PM be a Thaksin ?

Thitinan Pongsudhirak is director of the Institute of Security and International Studies at Bangkok’s Chulalongkorn University. He says there is no doubt Yingluck is a stand-in for Mr. Thaksin who has been actively leading Pheu Thai from exile.

“It’s not camouflaged in any way,” Thitinan noted.  “In 2007, 2008 we had a Thaksin proxy government. But, it was more indirect; Samak Sundaravej, the prime minister in early 2008, and then Somchai Wongsawat, Thaksin’s brother-in-law. In this case, Thaksin wanted to be known that Pheu Thai is his party, Yingluck Shinawatra is his younger sister and his representative.”

Internet to enter the competition

Like in other countries today, Thai politicians are actively using the social media to reach out to a bigger audience. They have integrated the use of Facebook, Twitter, and pic badges in their campaign strategy. The hashtags #thaielection and #THelection are used to monitor Thai election updates on Twitter.

Both Yingluck and Abhisit have their respective twitter accounts. Tweet Yourself Thai compares the tweets of the two candidates. Jon Russell has written two posts that discuss how Yingluck and Abhisit are maximizing the Internet for their electoral campaign. writes Mong Palatino

A collision between two blocks

Pavin Chachavalpongpun is a Thai politics observer at Singapore’s Institute of Southeast Asian Studies. He says the vote is basically a contest between traditional elites in Bangkok and supporters of Thaksin in the rural north.

“We are looking at a head on collision between two power blocks,” said Pavin.  “On one side led by the Democrat party, which represents the old interests, you know, of the palace, the military, the big businesses, and also, you know, the senior bureaucrats. Whereas Yingluck, she has emerged as a representative of the Thai poor, especially those in the north and the northeast region who have all these years been ignored by the traditional elite.”

But how democratic is Thaksin’s opposition party ask Joshua Kurlantzick

Yingluck is in many ways the most inexperienced prime ministerial candidate in modern Thai history; she has a decent record as a businesswoman and solid academic credentials, but she has no political background, and up until now expressed virtually no political ideas or opinions. Even now, in fact, Yingluck, though a decent speaker, basically just mouths platitudes and simplistic slogans, or simply says that she will be the puppet of Thaksin’s ideas.

In other words, Yingluck has ascended to the prime ministerial candidacy because of nepotism. Plain and simple. Now, this may be a wise election move, making the poll about Thaksin, since the former prime minister still enjoys strong support in the north and the northeast, and a referendum on him and his ideas could work for Puea Thai. But it is hard to say that the selection of Yingluck bodes well for the democratic legitimacy of her party.