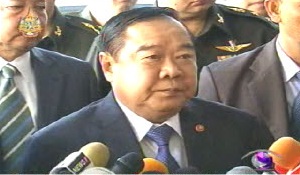 The military will remain neutral and will not interfere in the July 3 general election, Defence Minister Gen Prawit Wongsuwon said, urging political factions in political parties not to draw the military into politics.

Gen Prawit said he clearly told the meeting of the Defence Council that the military must be neutral and not interfere in politics.

Some politicians accused the military of attempting to meddle in domestic politics, but that is only political propaganda, Gen Prawit said, urging politicians to refrain from making any comment that might tarnish reputation of one of the country’s main institutions.

“Politicians could campaign on anything except by using comments that taint other oganisations,” he said.

“The military also wants to see reconciliation in the country and the nation can move forward,” he emphasised.

As for the violence that intensified during the political campaign, Gen Prawit said it was the responsibility of the police to investigate and find the assailants as it may not involve with politics.

The army chief however said he had ordered military commanders to closely supervise their subordinates not to engage in any unlawful activities that could undermine preparations for the polls. He said everybody has to observe the law.

Meanwhile, Army Chief Prayuth Chan-ocha echoed the defence minister’s comment, pledging that the military would remain neutral and will keep its distance from the political fray.

In response to the Pheu Thai Party accusation that his policy to have soldiers casting their vote for the Democrats in advance ballotting, Gen Prayuth denied the accusation.

The Thai armed forces have been major players in Thai politics since the 1932 coup which ended the absolute monarchy.

During the 1990s, some suggested that Thai soldiers were increasingly being by-passed by new societal forces, thus making the armed forces less relevant political players.

This study contends that during the 1990s the Thai military was not depoliticized. It has been argued that a ‘re-politicization’ of the Thai military occurred with the 2001 election of the Thaksin Shinawatra government. Thaksin brought a large team of persons with senior military backgrounds to office. By placing responsibility for military re-politicization at the door of Thaksin, some people indirectly fault him for the 2006 coup—in which the armed forces once again assumed direct political power.