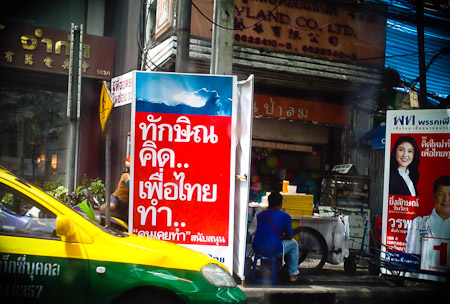 Thaksin’s youngest sister, Yingluck, 43, is know poll favorite bet on July 3, prompting fears that Thaksin will use her to seek revenge against his opponents when she becomes prime minister. Others worry that if she loses, or is somehow blocked, his supporters will turn to violent demonstrations, and Thailand will sink into another round of street riots and army crackdown.

A few days ago, the New York Times has a brief profile on Yingluck and some comments on the Thai election. Key excerpts:

Her campaign represents an extraordinary resurrection for Mr. Thaksin, the most divisive personality in the country. He was pronounced politically dead by many analysts after the coup, and he remains abroad to evade imprisonment for a corruption conviction, as well as a charge of terrorism for his role in backing the red-shirt demonstrations.

“I think very simply Thaksin has made this election about him,” said Chris Baker, a British analyst of Thai politics who has written a biography of Mr. Thaksin. “I think he did it not just by moving in Yingluck but also by the statement on the election posters: ‘Thaksin thinks and the party does.’ ”

Thaksin thinks and Pheu Thai does: the message couldn't possibly be clearer

…
Analysts say that rather than resolving the conflict, the election is likely to lead to more confrontations, either in Parliament, in the streets or through military intervention. The rapid rise and fall of governments in recent years, followed by protests and violence, has demonstrated that neither side is prepared to accept electoral defeat.

“We are in the middle of change of historic proportions in Thai political society, and a change that will take a long time to work through,” Mr. Baker said. “I’m talking 10 years, that sort of time frame. Along that way there are going to be various crises and various negotiations.”

Puea Thai, which translates as “For Thais”, flew in its most potent speakers for the rally, masters of the spicy mix of entertainment and outrage that are typical of Thai politics. But the biggest cheer was kept for Yingluck Shinawatra. With her telegenic good looks and powerful political support, Yingluck Shinawatra is shaking up Thailand’s first parliamentary election since a wave of political violence last year.

Thaksin’s youngest sister, Yingluck, 43, may win on July 3, prompting fears that Thaksin will use her to seek revenge against his opponents when she becomes prime minister in a coalition government. Others worry that if she loses, or is somehow blocked .

Thaksin was first elected in 2001, and brought a significant change to Thai politics. Though wealthy himself, he implemented populist policies, such as inexpensive universal healthcare that clearly benefited the poor. He also showed Thailand’s working classes that, in a real democracy, if they united they could elect a politician who responded to their concerns, which had never happened before in Thai politics.

In a recent interview with the Bangkok Post, Yingluck confirmed there will be an amnesty under her government if she wins the elections

An amnesty law is one of the components making up the reconciliation model. If it comes to pass that an amnesty law is needed, everyone must be pardoned, not just a single individual. We must hold fast to the legal principle that everyone is treated equally.

You wouldn’t deny then that your brother Thaksin Shinawatra is the real purpose of the amnesty law?

Don’t say that he is the goal. If Thaksin is to receive an amnesty, he will get it along with everyone else. My goal is to work for everyone, not just for one individual.

I want to apply equal justice for everyone. If anyone receiving injustice gets an amnesty, Thaksin will get it as well. It is not about targeting Thaksin as the main goal.

It is just not true because I want to solve problems for the people, and if we have the chance to form the government, people’s problems are the priority

Many businesses across Thailand will come to a halt while others will make necessary adjustments to pay their last respects to the beloved late King Bhumibol Adulyadej. END_OF_DOCUMENT_TOKEN_TO_BE_REPLACED
Loading...
Continue Reading