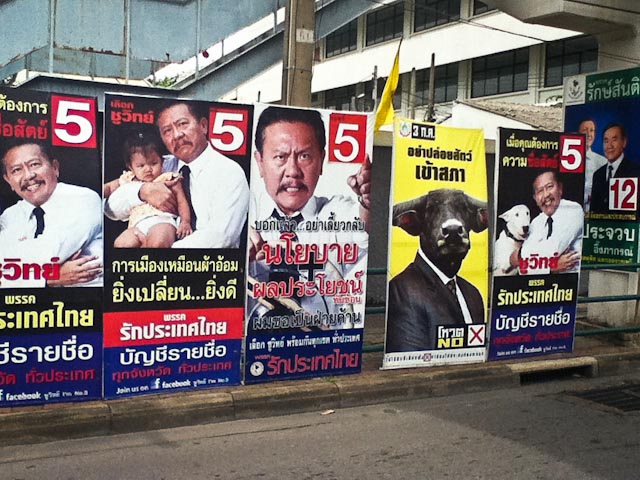 It isn’t exactly a ‘boycott the election’ drive because voters are still being encouraged to vote on election day in Thailand. But what is unique in this campaign is that the people are being asked to vote ‘no’ on the ballot. Voting is compulsory in Thailand, and penalties are imposed against those who are unable to vote. In short, voters still need to vote in order to cast a negative vote.

The main group behind the ‘Vote No’ movement is the People’s Alliance for Democracy, or the Yellow Shirts, which organized massive rallies a few years ago against the government of Thaksin Shinawatra. They are former allies of current Prime Minister Abhisit Vejjajiva, who is hoping to be re-elected in next week’s general election.

PAD is urging the public to reject the current electoral system, which they think has been corrupted by power hungry politicians represented by Abhisit on the one hand, and the opposition’s Yingluck Shinawatra Thaksin’s younger sister on the other. PAD insists that elections are a futile exercise unless thorough political and electoral reforms are first instituted.

Perhaps the ‘no’ option in the ballot is provided to inform voters that rejecting political parties and politicians on election day is a valid political choice.

But considering the other parties extremely attractive offers, the “no” vote will probably attract very few voters.

Thailand’s leading opposition Pheu Thai Party has rolled out a generous raft of populist policies ahead of the election. These include free credit cards for farmers and tablet PCs for school children, and a significant raise for the minimum wage to 300 baht per day (the daily minimum wage in Thailand varies among provinces between 200 and 240 baht).

But some Thais doubt their practicality and critics have attacked the policies as extravagant and unsustainable in the long term.It’s part of the Pheu Thai Party’s grand vision to remake the Thai countryside. And its candidate is planning to give farmers credit cards if it wins the election.

Political parties should avoid such a heavy emphasis on populist policies in their campaigns for the July 3 general election, says Prasarn Trairatvorakul, the governor of the Bank of Thailand.

Too many big-spending promises would erode confidence in fiscal disciplines and hurt the country’s image in terms of political development, he said yesterday.

Most political parties have been focusing on only short-term populist policies.

“When you look at the billboards and see promises such as tax cuts, increases in the minimum wage and interest-free mortgage loans, I pray that they tone down such campaigns. It casts the country in a bad light that we need to resort to populist policies in our general election,” he said.

“We need to have a better conscience [in campaigning]. We need to monitor when the new government submits its administration plan to Parliament in August, It will have to tackle other development issues as well.”

The World Bank said on Wednesday that the new government should continue to focus on fiscal discipline, which has been a strong fundamental for the Thai economy. It said huge cash injections for populist policies could fuel inflation. It also suggested that the government would need to reduce debt as a percentage of GDP for the finance of various welfare scheme.