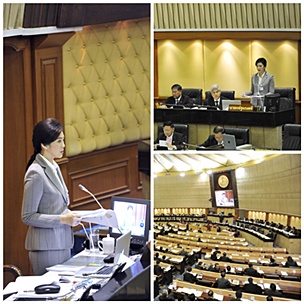 Thailand’s new Prime Minister Yingluck Shinawatra has emphasized the Government’s determination to foster reconciliation and harmonization for the sake of the country’s economic, social, and political development and for the benefit of all Thais.

The Prime Minister delivered the Government’s policy statement to the joint sitting of the House of Representatives and the Senate on 23 August 2011. The debate on the policy statement continued until August 25.

Policies announced cover the entire spectrum of government administration, ranging from national security, economic, social, natural resources, and environment to science, foreign affairs, and good governance. The main objectives of the Government’s policies are to ensure a strong and balanced economic structure, to bring about reconciliation, and to prepare Thailand for the establishment of the ASEAN Community in 2015.

The Government’s policies are classified into two phases, namely, urgent policies for implementing in the first year and longer-term policies to be implemented over the tenure of the Government.

As for urgent policies, the Thai Government will foster reconciliation, prevent and tackle drug problems, prevent and suppress corruption, promote water management in an integrated manner, accelerate efforts to restore peace in the southern border provinces, restore relations and promote cooperation with neighboring countries and other foreign countries, ease the hardships of the people and entrepreneurs because of inflationary pressure and higher oil prices, raise the people’s standard of living, reduce corporate tax, provide the people with greater access to financial sources, and increase prices of farm products and provide farmers with access to financial sources.

Other first-year policies include increasing earnings from tourism, supporting the development of arts and handicrafts and community products, developing the health insurance system, acquiring tablets for schools, and expediting political reforms with wide public participation.

The Government’s longer-term policies are as follows:

via Inside Thailand — Prime Minister Emphasizes the Government’s Determination to Foster Reconciliation and Harmonization.