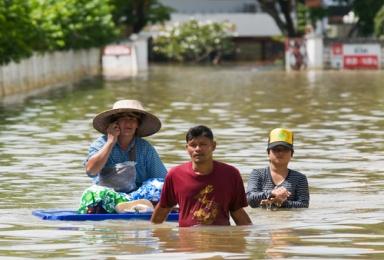 Thailands centre for the administration of flood situation warned local residents in river basins in 35 provinces to beware of forest-runoff and flash flooding due to heavy rains. Srisombat Pornprasit, deputy director-general of the Department of Disaster Prevention and Mitigation, as centre director, warned that heavy rain is expected countrywide on Monday and Tuesday.

People living in lowlands along the foothills in 35 provinces were urged to be alert for forest-runoff and mudslides, while those who live along the Chaopraya River and its tributaries should alert to water spilling over the riverbanks and install sandbag protective embankments, Mr Srisombat said.

The number of provinces affected by floods increased from 14 last week to 23 yesterday. Sukhothai has the highest number of flood casualties at 23, the Disaster Mitigation and Prevention Department reported.

The director noted people in four southern provinces — Satun, Trang, Songkhla, and Phatthalung, are advised to monitor forest-runoff and mudslides during these two days due to accumulative heavy rainfalls.

Mr Srisombat also reported 82 districts in16 provinces are still under floodwaters, affecting over 217,000 people and damaging 3.6 million rai of crops and 53 highways.

As of today, 82 persons were confirmed dead in the nationwide flooding, the deputy director-general said.

via 35 provinces on flash flood alert due to continued heavy rains.

She called for cooperation from the media to help seek donations from the public, saying that all ministries were now working together in joint flood-relief efforts. The Government has allocated funds from the national budget to urgently assist the affected people, as well. It is accepting donations and assistance all the time for flood relief.

The general public has also been urged to make donations to the Fund to Help Disaster Victims, which was set up by the Prime Minister’s Office. Donations are accepted at Krung Thai Bank’s savings account number 067-0068950, or at the Finance Division of the Office of the Permanent Secretary of the Prime Minister’s Office. For more information, please call 0-2282-4130, or contact the call center 1551.

The Government has established the Emergency Situation Management Center for Floods, Storms, and Landslides to deal effectively with the natural disasters. According to a report issued by the center, as of September 13, 21 provinces, with 99 districts, were flooded. A total of 3,578 villages, with 221,134 families and 693,433 people, were affected. Eighty-seven people have died since the floods began in late July.

Prime Minister Yingluck Shinawatra on September 11 visited villagers affected by flash floods and mudslides in Uttaradit province. She felt sorry for the affected people and called on them to be patient. At the same time, the Prime Minister ordered officials to search for the missing people promptly. The Royal Thai Army was told to send soldiers to help local people and repair damaged public facilities. It also agreed to install a disaster warning system in various vulnerable areas.