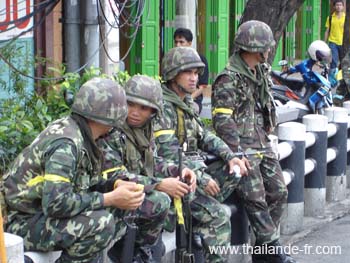 Red Shirt loyalists the United Front for Democracy against Dictatorship UDD gathered Sunday at the Democracy Monument in the Thai capital to mark the 5th anniversary of the 2006 military coup detat against the government of Thaksin Shinawatra.

The Red Shirt activists were led by leaders including Jatuporn Prompan, Nattawut Saikua, Korkaew Pikulthong and Weng Tojirakan. No longer in opposition, they have now all become members of parliament for the government-forming Pheu Thai party. Acting UDD leader Thida Thavornsreth also joined the event.The activity marks the fifth anniversay of the bloodless coup detat of Sept 19, 2006 which toppled then prime minister Thaksin, who was, at that time, in New York for the United Nations General Assembly.The UDD movement believes that the 2006 coup marks the beginning of the destruction of Thailands economic, social and political system.

Some 1,300 policemen from Bangkok Metropolitan Police and related authorities have been deployed around the rally.

During the 2006 coup in Thailand, acts of resistance were outnumbered by the flowers and garlands handed out to soldiers in Bangkok.

Sombat Boonngamanong, leader of Red Sunday, another Red-shirt faction, said that the group wanted to hold political movement while Pheu Thai-led government is in office in order to resist against some political groups that aim to topple the government.

A powerful group of army deposed the ex-premier Thaksin Shinawatra, the elder brother of the incumbent Prime Minister Yingluck Shinawatra in September 2006, causing him to live in exile aboard.

To be sure, when the purported ”good coup” was staged, few voiced opposition. It seemed like a necessary evil. There were exceptional pockets of dissent, including a sprinkle of street protests and one towering taxi driver _ Nuamthong Praiwan _ who rammed his vehicle into an army tank and subsequently hung himself in disgust. But such acts of resistance were outnumbered by the flowers and garlands handed out to soldiers in Bangkok. Conspicuous silence emanated from civil society, the business community, and Bangkok’s middle classes. Yet no upcountry red shirts of today showed themselves then. By and large, Thais initially either supported or tolerated the putsch.

The leaders of the Thai armed forces have recently been telling that there will be no coup, even if the new government goes against the favorite of the military/royalist/elite establishment.

Don’t be so sure. For one, such promises do not mean much: In 2006, not long before the last coup, senior army officers also were publicly promising that the military would not intervene in politics. The army clearly fears that, a reshuffle might be adverse to many senior officers, as former prime minister Thaksin Shinawatra had tried to do, and that the opposition cannot be trusted to manage a possible royal succession in the manner that archroyalists want.

To try and ensure the outcome they want, military officers have always been twisting the arms behind the scenes. Still, if that does not work, the army could exercise other options.