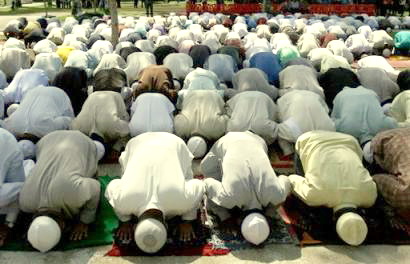 Speaking to reporters after meeting with Prime Minister Yingluck Shinawatra about the continuing violence in the southern border region, Gen Adul disclosed that there was substantial evidence against the two.At least five people are believed to have been involved in the deadly bomb attacks. Investigation is under way to track them.The deputy police chief said the prime minister instructed security personnel in the region to adjust their operations to protect the lives of the people with coordination among agencies concerned.

Gen Adul said the latest violence was part of an attempt to keep violence in the public eye, and to follow the pattern of violent acts by the insurgents.He also brushed aside suggestions that the blasts were aimed at challenging the new Pheu Thai-led government.

via Arrest warrants out for two suspects in multiple Narathiwat blasts.

Separatists have been mounting attacks in this jungle-covered region, near the Malaysian border, since 2004, killing more than 4,700 people. During the past six months, attacks have been “better planned and targeted, more sophisticated, and professional than earlier in the conflict,” says  a Thailand-based analyst.

But now insurgents are increasingly using IEDs, and have stepped up the type of violence. Buddhist monks are beheaded. Schools, the symbols of the Buddhist Thai state, are burned down. Drive-by shootings leave teachers and rubber tappers dead. Car bombs kill soldiers and bystanders.

Violence in Thailand’s southern, mainly Malay Muslim provinces has been steadily escalating since early 2004, exacerbated by the disastrously heavy-handed policies of Prime Minister Thaksin Shinawatra. There is widespread concern in the region that left unchecked, the unrest could turn into a mass-based insurgency, or even a regional jihad, although to date there is no evidence of external involvement in the bombings and killings that have become almost a daily occurrence.

The rise of more puritanical strains of Islam in southern Thailand is often cited as contributing to the violence, particularly given Muslim anger at the deployment of Thai troops in Iraq. But while Islamic consciousness and a sense of persecution and solidarity with fellow Muslims has grown over the last two decades, it would be a mistake to view the conflict as simply another manifestation of Islamic terrorism. The violence is driven by local issues.

There is no question that the Muslim south is one of the poorest parts of Thailand, but the grievances are political, and even well thought-out development policies will not deal with the unrest effectively unless those grievances are addressed. However, almost every step the government has taken has exacerbated the problem.

The origins of the current violence lie in historical grievances stemming from discrimination against the ethnic Malay Muslim population and attempts at forced assimilation by successive ethnic Thai Buddhist governments in Bangkok for almost a century.

Armed separatist groups have been active there since the late 1960s, with particularly virulent violence in the late 1970s and early 1980s. The largest and most effective group of several operating then was PULO (Patani United Liberation Organisation), which called for an independent Islamic state but whose thrust was more ethno-nationalist than Islamist.