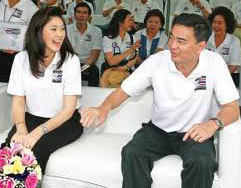 Prime Minister Yingluck Shinawatra vowed to fight against corruption in an anti-corruption campaign which took place at Lumpini Park in Bangkok with many important political figures joining the bandwagon.

Acting NACC President Mr. Pongsak Assakul said the campaign was aimed at reiterating the anti-corruption movement at every level in the Thai society. He added that it was a long road ahead but it was the beginning of a great change for Thailand.

The Prime Minister took an oath against corruption and stressed that her government placed great important on promoting good morals and transparency among all officials. She also said she would like to see the culture of honesty manifest in the Thai society.

via PM took an oath against corruption : National News Bureau of Thailand.

Big multinational corporations with their own codes of conduct may claim they no longer bribe politicians or bureaucrats. But if the climate is such that it demands bribes or bribes are offered by their competitors, these corporations may lose out given the lack of a level playing field, warned Deunden Nikomborirak, a specialist in economic governance at the Thailand Development Research Institute.

“If the demand [for bribes] continue, it’s either you leave or you comply,” Deunden said. “There can be no level playing field if competitors do not stick to integrity.”

Deunden’s recent research revealed that out of the more than 200 cases of illegal practices by firms listed on the Stock Exchange of Thailand from 1999-2010, those punished were just slightly over 5 per cent.

A senior United Nations official says corruption across Asia is undermining efforts to fight poverty and reduce income disparities. In a wide ranging interview with VOA, Dr. Noeleen Heyzer, the UN’s executive secretary for the Asia and Pacific Economic and Social Commission, said countries must invest in what she called social protection to ensure economic growth in Asia.

“You know the issue is governance. Because at the end of the day you need economic governance. You need better political governance because to be able to have systems that invest in the social foundations of your communities in order that people can have a better life. And obviously any forms of corruption acts against that.”

The Asian Development Bank recently called for improvements in government accountability as “critical” in Asia to maintain social and political stability.  It said rising corruption was evident in a “deterioration in the quality and credibility of national political and economic institutions.”