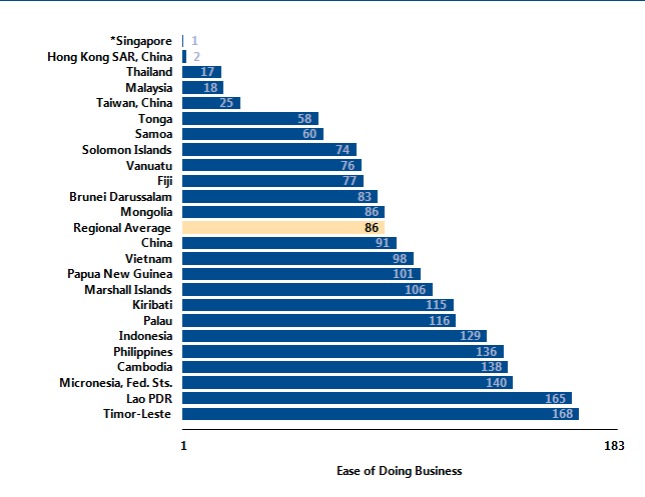 A new IFC and World Bank report finds that economies continued to implement reforms that enhance local firms’ ability to do business, with transparency and access to information playing a key role in the reforms.

As usual Singapore is leading the pack, and keeps its pole position, but Hong Kong is following close behind and the report notes that:

Hong Kong SAR, China, made starting a business easier by introducing online services for company and business registration, including delivery of documents to the Companies Registry, signing with digital signatures or passwords, online payment, and issuance of certificates. The economy also made getting electricity easier, by increasing the efficiency of public agencies and streamlining the utility’s procedures with other government agencies.

Thailand also gets some good marks for its recently implemented one-stop shop, but still the kingdom goes down from 16 to 17th position. Nevertheless Thailand is in third in the regional pool, after Singapore and Hong Kong which are top global competitors

Released today, Doing Business 2012: Doing Business in a More Transparent World assesses regulations affecting domestic firms in 183 economies and ranks the economies in 10 areas of business regulation, such as starting a business, resolving insolvency and trading across borders. This year’s report data cover regulations measured from June 2010 through May 2011. The report rankings on ease of doing business have expanded to include indicators on getting electricity. The report finds that getting an electrical connection is most efficient in Iceland; Germany; Taiwan, China; Hong Kong SAR, China; and Singapore.

Thailand is in third in the regional pool, after Singapore and Hong Kong which are top global competitors

The global report shows that governments in 125 economies out of 183 measured implemented a total of 245 business regulatory reforms—13 percent more reforms than in the previous year. In Sub-Saharan Africa, a record 36 out of 46 economies improved business regulations this year. Over the past six years, 163 economies have made their regulatory environment more business-friendly. China, India, and the Russian Federation are among the 30 economies that improved the most over time.