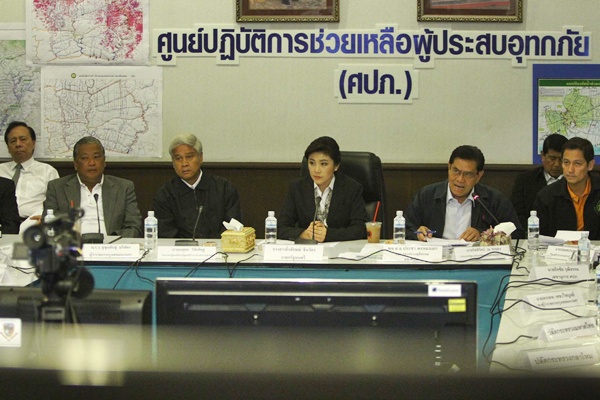 As the situation is getting serious around Bangkok, the United Nations said it  is ready to cooperate with Thailand in dealing with the flooding situation and its impact.

However, he said the water situation in Bangkok is not yet in crisis and there is no need to declare additional at-risk zones to the seven districts already announced Wednesday.

Prime Minister Yingluck Shinawatra said that she had received a telephone call from United Nations Secretary-General Ban Ki-moon, who expressed the United Nations’ readiness to offer a helping hand, although Thailand had not requested.

She said that discussions on this matter would be made at the operational level first, and that the Ministry of Foreign Affairs would be asked to serve as the coordinator.

Prime Minister Yingluck Shinawatra said that she had received a telephone call from United Nations Secretary-General Ban Ki-moon, who expressed the United Nations’ readiness to offer a helping hand

Deputy Secretary-General of the United Nations, Mrs. Asha-Rose Migiro, during her recent visit to Thailand, expressed her condolences regarding the ongoing flooding situation. She also commended the Thai government’s efforts to cope with the situation. The Ministry of Foreign Affairs reported that the United Nations had conducted a number of projects on disaster management and prevention, which Thailand could benefit from exchanging information.

Foreign Minister Surapong Tovichakchaikul also expressed his appreciation to the United Nations and stated that not only Thailand, but also other countries in this region, such as Cambodia, Lao PDR, and Vietnam, were facing severe floods. Since these countries are major food producers, food security would also be affected. A comprehensive study on the impact of floods on food security should therefore be undertaken to develop the most appropriate solution.

As more than four million acres of farmland in the central region, which is a major rice-producing area of the country, have been damaged, the Office of the National Research Council of Thailand is taking steps to undertake research to solve the problem of rice production. A rice research strategy for 2012-2016 will be worked out to cope with Thailand’s rice situation in the future.

In other related news, the Ministry of Public Health on October 19 reaffirmed that there was no chemical leakage from the Navanakorn Industrial Estate in Pathum Thani province, which has been inundated. Officials from the Pollution Control Department, the Department of Disease Control, and the Department of Health were dispatched to inspect the flood-affected area. A preliminary report said that no hazardous chemicals were found.

Flooding has also affected certain roads in several provinces. The Department of Highways has advised travelers to check traffic conditions for more information at the hotline on 1586, or 1193, around the clock.

Meanwhile, the Prime Minister called on the people to be alert to the flooding situation, but not to panic, saying that the Government would take care of flood victims in all areas and restore normalcy once the flooding eases.

via Inside Thailand — United Nations Ready to Help Thailand Deal with Floods.