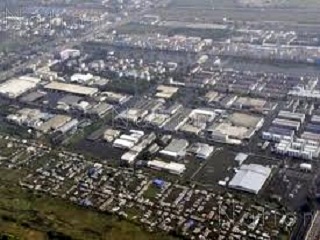 Thailand’s historic central province of Ayutthaya, one of the worst affected by the recent floods, on 21 November 2011 held a “Big Cleaning Day” for the Bang Pa-In Industrial Estate after floodwaters were drained. According to Ayutthaya Governor Wittaya Phewpong, the clean-up will help rehabilitate the estate and restore foreign investor confidence.

Bang Pa-In Industrial Estate is one of seven industrial estates and parks in Ayutthaya and Pathum Thani including Saha Rattana Nakhon, Rojana, Hi-Tech, Factory Land, Nava Nakhon, and Bangkadi that were forced to close by the deep floodwaters. Mr Wittaya said that the Labor, Industry, and Public Health Ministries cooperated to revive the Bang Pa-In Industrial Estate in accordance with its 58 day-rehabilitation plan, from 20 October – 16 December 2011.

The clean-up will allow the factory owners to start repairing plants damaged by the flood, he said. It is expected that the factories could resume running their production lines and workers return to their duties by December 16, he said.

Meanwhile, at Rojana Industrial Estate, also in Ayutthaya, powerful water pumps with a capacity of 24,000 cubic meters per day have been operating round-the-clock, leading to significant reductions in the water levels.

With assistance from the Japan International Cooperation Agency JICA which provided a number of pump vehicles, it was expected that the mission to revive all three phases of the Rojana Industrial Estate could be completed by the end of this month.

As these clean-up operations gain ground, Tourism Authority of Thailand TAT Governor Suraphon Svetasreni said, “We are happy that the turnaround has begun and that there is light at the end of the tunnel. It will be much easier to mount a bounce back campaign and push out positive news, which we know is being eagerly awaited by all our friends, partners and potential visitors worldwide.”

via Clean-Up Operations and Rehabilitation Plan Start in the Ayutthaya Industrial Estates.