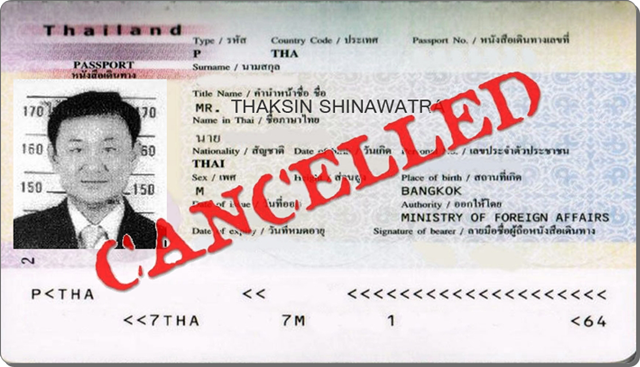 Mr Surapong said he received a letter from the Department of Consular Affairs via the ministrys permanent secretary upon receiving Mr Thaksins request for passport issuance. The request was sent through the Thai ambassador to Abu Dhabi in the United Arab Emirates UAE, he said.

The foreign minister admits that he has reversed the revocation of Thaksin's passport,

The Department of Consular Affairs also informed him that Mr Thaksins passport was revoked on April 12 , 2011 in accordance with the previous governments policy. The then foreign minister Kasit Piromya signed the order withdrawing Mr Thaksins passport under the ministrys regulation that allow minister to revoke a passport of anyone who was staying abroad if he/she deemed to pose any harm to the country.

Mr Surapong however said he and the government considered that, at the moment, Mr Thaksins staying abroad did not threaten the countrys security, therefore he has revoked his predecessors order to strip Mr Thaksins passport.

Reissuing the ousted prime ministers passport depends on the Department of Consular Affairs consideration in accordance with ministerial regulations, he said.”This is the last time that I will give a news briefing on the issue. I beg you, the media, to end it as I dont want to waste my time.” Mr Surapong said. “I would be pleased if the opposition will scrutinise me in parliament. Anyone who would like to file suit is also welcomed as I insist that what Ive done is lawful in every step,” he said.

The foreign minister also denied an allegation that he had delivered the passport to Mr Thaksin while he was on a mission at Dubai on Nov 22-25. Mr Thaksin, ousted in a coup in 2006, was sentenced in absentia in 2008 to two years imprisonment for violating a law on conflict of interest by helping his then wife acquire a parcel of prime Bangkok commercial land at a price far below the market value.

Many businesses across Thailand will come to a halt while others will make necessary adjustments to pay their last respects to the beloved late King Bhumibol Adulyadej. END_OF_DOCUMENT_TOKEN_TO_BE_REPLACED
Loading...
Continue Reading