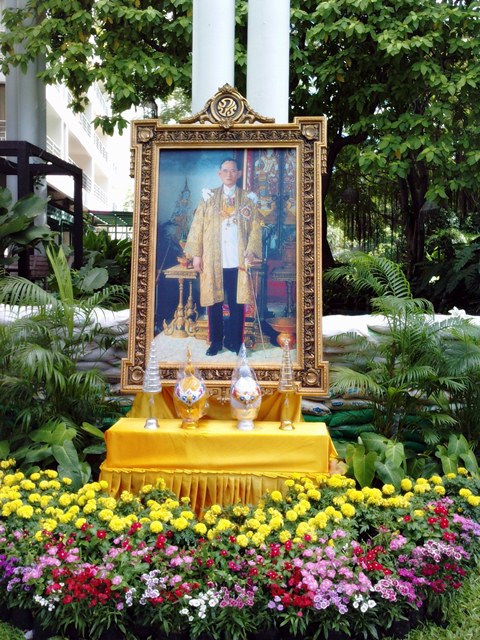 In a recent article published on Thailand’s official government website, the department of public relation made a rare contribution to the ongoing debate on lèse majesté laws. The Director-General of the Department of Information and Spokesperson of the Ministry of Foreign Affairs, Mr. Thani Thongphakdi, said that the lèse-majesté law is not aimed at curbing people’s rights to freedom of opinion and expression nor the legitimate exercise of academic freedom, including debates about the monarchy as an institution.

The statement was made in response to media enquiries about recent expressions of concerns by some quarters regarding the use of the lèse-majesté law in Thailand. He said that the lèse-majesté law is part of Thailand’s Criminal Code, which also contains general provisions on defamation and libel of private individuals. The law gives protection to the rights or reputations of the King, the Queen, the Heir-apparent, or the Regent in a similar way libel law does for commoners.

As in other democratic societies, he said, Thai people enjoy their constitutional rights, including the rights to freedom of opinion and expression. Differing views are aired widely and there is vibrant debate on all aspects of life. However, those who abuse their rights by spreading hate speeches or distorted information to incite violence and hatred among Thais, as well as towards the monarchical institution, in contravention to the law – whether through the internet, on-line social networks, communication devices or otherwise – have to be held accountable in accordance with the law.

The legal proceedings against Mr. Amphon Tangnoppakul and Mr. Lerpong Wichaikhammat (Joe Gordon) were carried out in accordance with Thai law. Both men have been accorded due process as provided by the Thai Criminal Procedures Code, including the right to fair trial, due opportunity to contest the charges, and assistance from their lawyer. They are also entitled to the right to appeal.

via The Monarchy — The Use of the Lèse-Majesté Law in Thailand.

But this contribution does not reflect the ongoing debate on lèse-majesté law, and in particular its recent and very strict enforcement

Since the 19 September 2006 coup, there has been an exponential expansion in the use of article 112 and the 2007 Computer Crimes Act to intimidate dissidents and constrict speech more generally.

A picture showing the King of Thailand is shown in a street of Bangkok, to commemorate the King 84th birthday

Article 112 and constriction of speech

While the case of Ms. Chiranuch Premchaiporn is the case most widely followed internationally, in 2011 there have been a number of other significant sets of charges brought and prosecutions completed. In March 2011, Tanthawut Taweewarodomkul, was sentenced to 13 years in prison for allegedly violating both laws in material posted to Norporchorusa.com.

In May 2011 Joe Gordon, a Thai-American man, was charged under both laws for allegedly posting a link to a Thai translation of the English-language book, “The King Never Smiles”, by Paul Handley, on his website. In late November 2011, the trial of Mr. Somyos Prueksakasemsuk, long-time labour rights activist and editor of Voice of Taksin and Red Power magazines, will begin. These are only several of many known, and perhaps many more unknown cases, of people charged under either article 112 and/or the Computer Crimes Act. In most article 112 and Computer Crimes Act cases, the court refuses to grant bail, and so those charged must also endure many months of pre-trial conviction.

With particular concern to how the courts have gone beyond their duty to become a proactive space of the restriction of rights, the Asian Human Rights Commission has also sought to highlight a recent Constitutional Court decision in the case or Ms. Daranee Charnchoengsilpakul.

By placing the emphasis on articles 177 and 178 of the Criminal Procedure Code, rather than the issue of what constitutes national security, the Constitutional Court ruled that trials held behind closed doors are absolutely fine. This is clear, deliberate and explicit step backwards for human rights and justice in Thailand.  In the case of Ms. Daranee Charnchoengsilpakul, it is not only that the court has failed to be a site in which human rights can be secured, but it has become a site in which human rights are actively violated and justice is proactively foreclosed. As such, the ruling in this case signifies the larger condition of human rights for people in Thailand generally under the revitalized internal security state.

The Ministry of Foreign Affairs FAQ on The King

To avoid misconception and serving unexpected jail terms, I would also recommend reading of Ministry of Foreign Affairs FAQ on The King, which contains guidelines to the official point of view concerning the monarchy and several controversial contributions like its role in Thailand politics.