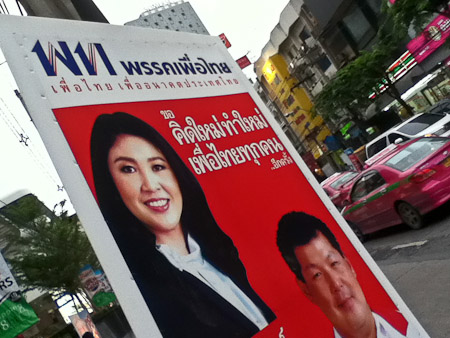 With the flood waters mercifully receding in much of the country, normal service has resumed in Thai politics—and that means talking obsessively about Thaksin Shinawatra. The former prime minister, ousted in a coup in 2006, has been living in exile since 2008 to avoid going to prison for corruption on charges that he has always claimed were politically motivated. But now, with a new government in power led, very handily, by his younger sister Yingluck, it seems that it has become a matter of when not whether he returns to his native land.

The new government has begun “exploring every avenue to bring Thaksin back”, according to Pavin Chachavalpongpun, an analyst of Thai politics at the Institute of South-East Asian Studies in Singapore.

In mid-December it was revealed that Mr Thaksin had been given a new Thai passport.

Until then he had been travelling on Nicaraguan and Montenegrin documents. Now the government is working on an amnesty bill aimed at pardoning those jailed for political offences over the past few years. This will cover not just many of their own “red shirt” supporters but also leaders of the monarchist, anti-Thaksinites known as the “yellow shirts”. Crucially, it will also find ways to take in Mr Thaksin himself. The legislation might be passed by Parliament before the middle of the year.

Mr Thaksin remains a highly controversial and divisive figure in Thailand. So even his own sister’s government will have to proceed cautiously. The government shied away from pressing for a royal pardon on the occasion of King Bhumibol’s birthday on December 5th, wary of the backlash from the yellow-shirt movement that this would surely have provoked.

via Thailand’s politics: Waiting for the man | The Economist.