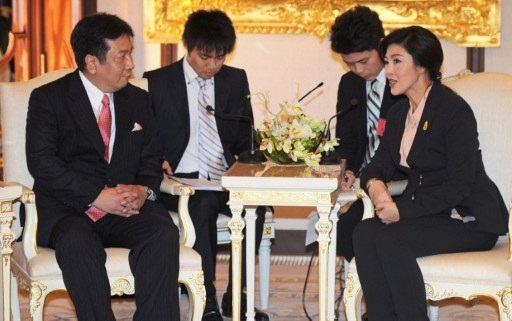 She also told the Japanese minister that the government has prepared a credit line of US$1.2 million for Japanese entrepreneurs and investors whose factories have been impacted by the flood crisis last year.

The Japanese minister also expressed sympathy for Thailand’s flood victims and asked about rehabilitation measures for the industrial sector and the international business community which operate their businesses in Thailand.

Thailand’s plan for economic revival was important for the entire region and was in the spotlight by many countries worldwide, he said.

The Japanese minister advised that Thailand should put comprehensive flood-prevention measures in place in the future.

Ms Yingluck took the opportunity to thank Japanese Prime Minister Yoshihiko Noda, government and people for helping Thailand during its hardships in the form of financial assistance, relief supplies and experts.

The flood crisis caused extensive damage, but the country’s strong economic fundamentals as well as helping hands from all parties have helped Thailand get back to its feet quickly, the Thai premier said.

Japan still ranked top as major investor in Thailand, with a 90 per cent increase in its investment.

The Thailand Board of Investment (BOI) has revealed that investment projects applying for BOI promotion from January through 23 December of 2011 have reached Bt663.6 billion in value, exceeding the target investment value by 32 per cent. This figure reflects a strong investment situation in the country and confidence on the part of of both Thai and foreign investors. Japan still ranked at the top as major investor country, with a 90 per cent increase in its investment.

Dr. Wannarat Channukul, the Minister of Industry, disclosed that 1,847 investment projects with a total value of Bt663.6 billion being applied for the BOI incentives fromJanuary until 23 December 2011. In terms of number of projects, this year’s total represented a growth of 21 per cent over the same period last year, when 1,524 projects applied. Total investment value on the other hand rose significantly from last year’s Bt412 billion, representing a 61 per cent increase.