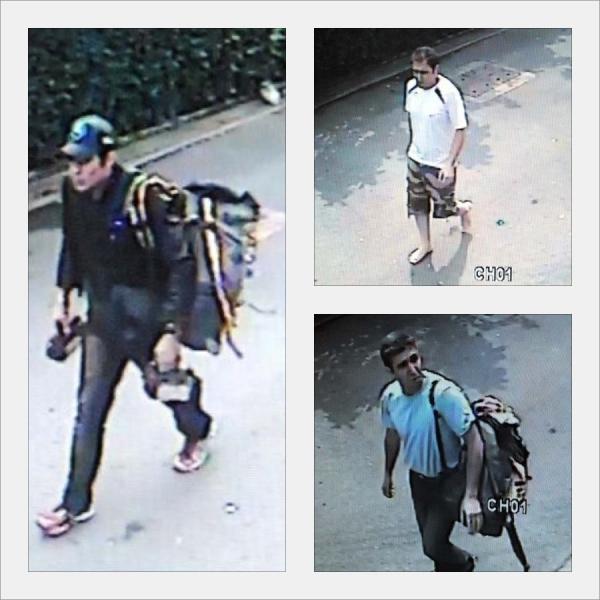 Bangkok Pundit has a fairly exhaustive press review of the bombing in Sukhumvit 71 (Phrakanong or Soi Pridi if you are Thai).

Around 2.20pm there was an explosion at No. 66  Soi Pridi Bhanomyong 31 (close to Pridi Bhanomyong 35) on Sukhumvit 71. This was at a house that had been rented to three Middle Eastern males who identified themselves as Iranian and a female who had been living there for several weeks (Bangkok Post). The first explosion appears to have been an accident. AP:

In Thailand, Tuesday’s bizarre sequence of explosions began when explosives apparently detonated by accident, blowing off part of the roof of the Bangkok house.

BP: Based on the explanation, and as BP said in the earlier post, BP would concur with this.

After the first explosion, according to ThaiPBS, two men left the rented house quickly – they are suspects No. 1 and 2 below – and, according to the Bangkok Post, they got into a taxi.

Around 5 minutes (Bangkok Post)/10 minutes (ThaiPBS) after the 1st explosion, another man – Suspect No. 3 as per below – left the rented house. He was carrying a large backpack and two boxes (Bangkok Post). He was bleeding (Bangkok Post; ThaiPBS; NYT). According to the NYT, the police said that the man moved further down the soi towards Sukhumvit 71 and tried to hail a taxi and threw an explosive device, possibly a hand grenade, when it did not stop, destroying the front half the vehicle. This is backed up by what the taxi driver told Thai television (Reuters). Bloomberg states it was a M-26 grenade. Photo of taxi is here. This is the second explosion.

Sometime after this, the suspect continued walking and made it to Sukhumvit 71, but his attack against the taxi driver meant he was now known per the NYT:

Mr. Wichai then saw the man running up a busy thoroughfare. “People were yelling, ‘Get him! Get him!’ ” he said.

Maliwan Taengaiemthai, a 37-year-old street sweeper, said she saw the man heading toward a school where a police pickup truck was parked.

“The police got out of their car and crouched down, pointing their guns at the man,” she said. “The man stopped for a while. He looked at the police.”

Ms. Maliwan said she then heard an explosion and saw the man fall to the ground. The police said he tried to throw a grenade at them, but that it did not go far enough. An account in the Thai media said the grenade hit a tree and bounced back toward Mr. Morabi. In any case, his legs were destroyed in the blast. At least three other people were injured.

BP: He was later taken to hospital – see below…

Who are the suspects?

For suspect No. 1, not much is known about him. He left the scene immediately after the explosion at the rented house.

For suspect No. 2, according to The Nation the police said his name is Mohammad Hazaei, he is 42, and from Iran. One assumes they got this information from his passport which means well none of it might be true as the passport could be a false, counterfeit, or forged passport (see here for an explanation of the difference between those types of passport), but confirming whether he is Iranian or not is likely the first and easier task (as from BP’s professional experience it is difficult for people to maintain the façade of being from one country when they are not in the hands of a skilled interrogator). According to the Bangkok Post, he was arrested at 6:20 at Suvarnabhumi Airport as he was about to board a flight to Kuala Lumpur.* You can see a photo of him being presented by the police here – from the same Jor Sor 100 reporter.

For suspect No. 3, he is identified as an Iranian named Saeid Moradi (The Nation). The Nation has details of his condition:

Doctors at Chulalongkorn Hospital said the suspect had lost his right leg and sustained injuries to an eye and abdomen. They have also had to amputate his left leg. “He has serious wounds but he should survive,” deputy director Dr Ratthaphlee Phak-at said

BP: A very graphic video of him on the sidewalk injured can be seen here.

See original here:
Round-up of reports on the 3 explosions in Bangkok

The system of rice intensification (SRI) is gaining ground in Asia