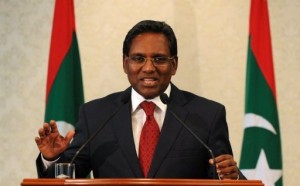 Here are the most recent updates from four of the eight SAARC nations. For news from the rest of the countries, please visit their respective national pages. … MALDIVES – A top US diplomat arrived in the Maldives on February 11 to help resolve a deepening political crisis sparked by the ousting of the Indian Ocean nation’s first democratically elected president. Mohamed Nasheed, who came to power in 2008, says he was forced to quit on February 7 in a coup led by mutinous army and police officers who threatened him with violence unless he stepped down as leader of the famous holiday islands. He was replaced by his vice president Mohamed Waheed, whom Nasheed accuses of being party to the conspiracy to topple him. … SRI LANKA – Sri Lankan President Mahinda Rajapaksa reached Pakistan on February 10 to Pakistan to further strengthen political, economic and defence ties between the two countries. Pakistan and Sri Lanka are also expected to sign an agreement during President Rajapaksa’s visit under which the latter would get $200 million export credit facility through the State Bank of Pakistan. The two countries are aiming to increase bilateral trade to $2 billon mark over the next three years and pledged to support each other at regional and international forums. The commitment is significant in the light of the forthcoming UNHRC session, which is expected to put pressure on Sri Lanka to address the ethnic conflict between Sinhala majority and the Tamil minority of the island nation. … NEPAL – A top Maoist leader on February 10 said the government will finish the key task of concluding the peace process and framing a new constitution, amid a deadlock between the political parties over form of governance and federal structure to be adopted in the country. “The peace process and the constitution drafting will be completed within the stipulated time frame of May 27,” Education Minister and senior Maoist party leader Dinanath Sharma said on the sideline of the inaugural function of the UK Education Fair in the capital. The landmark peace process has been stalled amid the failure of the political parties to agree on the form of governance and federal structure. … BHUTAN – By the end of 2012 at least 40 locations in western and central Bhutan will have access to 3G or third generation high speed Internet connectivity, which is today available only in the core areas of Thimphu city. Starting March Bhutan Telecom will start work to expand its 3G network in Thimphu, Phuentsholing, Paro and Gelephu. 3G is the ‘3rd Generation’ technology for mobiles which enhances internet speed and enables features like video calling, faster audio and video streaming and quicker downloads. In urban Thimphu, six more locations will be added to the 14 existing 3G sites. The other 20 locations will be added in Phuentsholing, Paro and Gelephu and at tertiary institutes like Sherubtse College, College of Science and Technology and the college of business studies in Gedu. “Many young people at these institutions are in need of these services and they are the people who use these services more often,” the CEO of Bhutan telecom, Nidup Dorji, said. The present 3G sites in Thimphu are located within a five km radius of Bhutan Telecom head office. For 3G data service the speed range is 7.2 mbps. – Agencies