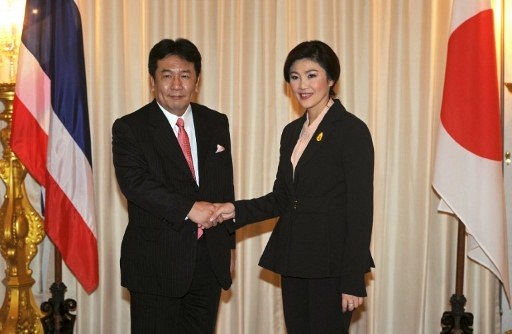 Thai Prime Minister Yingluck Shinawatra will visit Japan on Tuesday to strengthen bilateral ties and revive Japanese investor confidence in Thailand after last year’s flood crisis. Ms Yingluck and her entourage, including Deputy Prime Minister/Commerce Minister Kittaratt Na Ranong and a group of business executives, will make an official working visit to Japan from tomorrow through Friday to enhance the two countries bilateral relations and to rebuild confidence among Japanese investors, especially regarding the Thai governments measures to handle flood situations, after the severe floods that hit the country last year.

The prime minister will have an audience with Japanese Crown Prince Naruhito, as well as meet with her Japanese counterpart Yoshihiko Noda to discuss a wide range of issues covering mutual interests.

Thailand's Board of Investment (BOI) has launched a roadshow campaign, starting in Japan, to boost foreign investors' confidence along with promoting the country's tourism image.

The Thai prime minister will use the occasion of the 125th anniversary of the establishment of diplomatic relations between Thailand and Japan to promote the strategic partnership between the two countries in terms of political ties, security concerns, the economy and social aspects at both bilateral and multilateral levels The focus will be on measures supporting development of linkages between the Association of Southeast Asian Nations ASEAN and Mekong Sub-region connectivity, especially regarding the rehabilitation of the economies of both countries, as both were  impacted by natural disasters in 2011.

Ms Yingluck will also use the opportunity to confirm to the Japanese private sector that the Thai government is prepared for future floods.

The Japanese private sector is also to be encouraged to take part in rehabilitation projects for Thailand’s infrastructure.The premier was scheduled to deliver a speech at a seminar on investment opportunities in Thailand.

The event will be attended by many members of the Japanese business community. She will also meet with a leading company in the tourism sector, and companies planning to invest in Thailand, as well as business organisations such as the Japan Finance Corporation JFC and the Japanese Chamber of Commerce and Industry JCCI to seek more cooperation to develop Thailands competitiveness as the country is a major Japanese production base and product distribution centre.

via PM to visit Japan to rebuild investor confidence after flood crisis.

Thailand’s Board of Investment (BOI) has launched a roadshow campaign, starting in Japan, to boost foreign investors’ confidence along with promoting the country’s tourism image.

Industry Minister Pongsawat Svasti spoke at the campaign launching by BOI under the theme “Unbeatable Thailand, Unparalleled Opportunities” that such plan is highly important to the country after the flood-impacted companies resumed production as a result of Thailand’s measures to alleviate investor problems from the recent flood crisis.

Mr Pongsawat said the latest strategy reflects the soul of Thais much as a fighter who passes through many obstacles, despite natural disasters and political conflicts.

The roadshow in other countries will provide good opportunities for Thailand in the future such as investment in varied industries and types of services and on becoming a production hub to welcome the ASEAN Community which is to take effect in 2015.