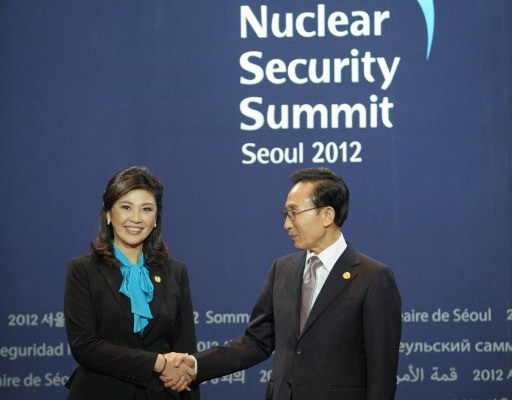 Thai Prime Minister Yingluck Shinawatra on Tuesday joined the leaders of more than 50 nations attending the 2012 Seoul Nuclear Summit which is focusing on achieving more specific actions to prevent nuclear terrorism and to ensure atomic safety.The summit, being held at Seoul’s Convention and Exhibition Center (COEX), is the second of its kind since the inaugural gathering in Washington DC two years ago, then hosted by US President Barack Obama.

During the meeting, the Thai premier is expected to suggest establishing a nuclear monitoring network in the Southeast Asian region and establishment of a Center of Excellence to investigate nuclear traces.The Center could help expand capability to scientifically investigate and track transnational smuggling of nuclear weapons. The discussion among the world leaders could boost cooperation for more effective nuclear terrorism prevention.

The Seoul summit is expected to serve as a “stepping stone” to translate the political will generated at the Washington summit into action, while laying a cornerstone for attaining key nuclear security goals in the mid- and long-term, a senior Seoul official with information on the summit was quoted by local media as saying on Tuesday. (MCOT online news)

Thailand’s economic growth over the last three decades has been fueled and accompanied by rapid industrialization, urbanization, and by intensified agricultural production and fishing. This growth, which has relied extensively on the country’s abundant and diverse natural resources, has degraded land and water quality, caused the loss of natural habitats, and generated increasing levels of air and water pollution. In response, the Government and people of Thailand have launched new initiatives to improve air and water quality, reforest degraded land, adopt energy efficient technologies and invest in pollution abatement schemes.

Thai economy decelerated in the previous year, particularly in the last quarter where global economic downturn and internal political unrest adversely affected manufacturing production and tourism. Nonetheless, farm income in Thailand still expanded well from higher major crop production and price compared to the previous year. On the demand side, private consumption and investment declined notably in the last quarter, despite falling inflation during the second half of the year in line with lower oil prices. Both export and import expanded satisfactorily during the first three quarters. However, during the last quarter, export contracted following trading partners’ economic slowdown while import decelerated markedly in line with export and domestic demand conditions.