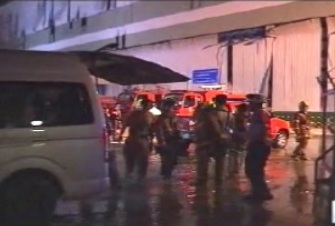 The death toll from a fire at a factory in the Map Ta Phut industrial estate has risen to 12, while 24 out of 142 injured people remain hospitalised, according to the Public Health Ministry on Sunday.

Dr Surawit Khonsomboon, deputy public health minister, said that the explosion and fire at a unit of Bangkok Synthetics Co (BST), a petrochemical factory in this industrial estate in the eastern province of Rayong killed 12 people including nine on-site and three at the hospital later.

Two patients are in critical condition and the province’s emergency plan is still in place. Residents in ten communities around the industrial estate have evacuated to the Pattaya side.

Prime Minister Yingluck Shinawatra on Sunday travelled by a helicopter to visit the injured and will convene a meeting with local officials to discuss measures mitigating any impact from the explosion and chemical leakage.