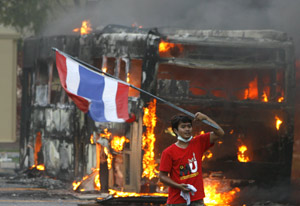 I recently asked a journalist friend of mine with over 25 years of experience reporting across Southeast Asia, “Do you think it’s possible we’ll see a coup in Thailand soon?” His sardonic reply was, “A coup in Thailand? Well it’s not like that’s ever happened before.” In its current state, Thai politics is at best dysfunctional and inefficient and at worse dangerously chaotic. There are many variables accounting for this combustible situation.

In this post, I will attempt to contextualize the primary reasons why many analysts, including myself, are coming to hold the opinion that another round of politically motivated violence is right around the corner in Thailand. Class Struggle Firstly, as mentioned in an article I penned for the Southeast Asia Globe, Thailand is divided and segregated along class lines.

“The country can be divided roughly into two main groups: the poor, rural majority; and the Bangkok elite. Likewise, there are two main political parties which represent, in general terms, each interest: the former by the Pheu Thai party and its red shirt surrogates, and the latter by the Democrat Party, who too have their own group of cohorts known as the yellow shirts.”

This division has played out in various open demonstrations over the past six years. In 2008, the pro-monarchy Yellow Shirts were able to successfully shutdown Bangkok’s international airport by protesting on the runways.

In 2009, the Red Shirts stormed an ASEAN Summit meeting in the resort town of Pattaya, resulting in delegates from other Southeast Asian nations having to be airlifted by helicopter from the roof of the hotel. Both the Yellow Shirt and Red Shirts know that mass organizing is a strategy that works. Both sides know that “if [they] don’t get what [they] want, the best tactic now is to take to the streets and paralyse government and business”, wrote the Council on Foreign Relation’s Joshua Kurlantzick in a piece at Asia Unbound. This class struggle has not, and will not go away anytime soon.

The military is an exceedingly powerful actor in Thai politics and always seems to be in an advantageous position to determine the fate of the country. In a recent piece for The Diplomat, Mr. Kurlantzick writes: “[T]he Thai armed forces are currently beefing up their strength, working to promote closer intra-army unity, and essentially preparing for a potential conflict with the elected government should Thaksin return to the country, or should the elected government try to carve into the army’s political independence.” Thaksin’s Return And what of Thaksin, who was convicted in absentia of corruption and graft and sentenced to two years in prison following his removal from office?

Thailand: Would You Care for a Coup Today?