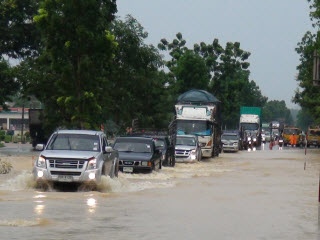 Several southern provinces have been hit by flash floods, triggered by heavy rain with one death reported in a storm-related road accident in the Andaman coastal province of Krabi.

Flooding in Ranong extends to five districts with no sign of abating while more flash floods and rains continue. The governor met Wednesday morning with agencies concerned to assess the situation to help local residents.

In Krabi, storms hit several areas, damaging scores of houses and crops in the provincial seat.

One death was reported as a motorcycle crashed into a felled tree on a road.

A thousand small fishing boats in Satun have stayed ashore for a week due to strong winds and 2-3 metre waves in the Gulf of Thailand. Some seaside houses were damaged by smashing waves.

In Chumphon, Phinit Charoenpanit, governor reported the flood situation has extended to five districts and warned fishermen to beware of rough sea until the end of this week as rainfall continues.

A 200-metre portion of Asian Highway 41 in Sawi district is under 30-50cm water and is impassable for small vehicles.